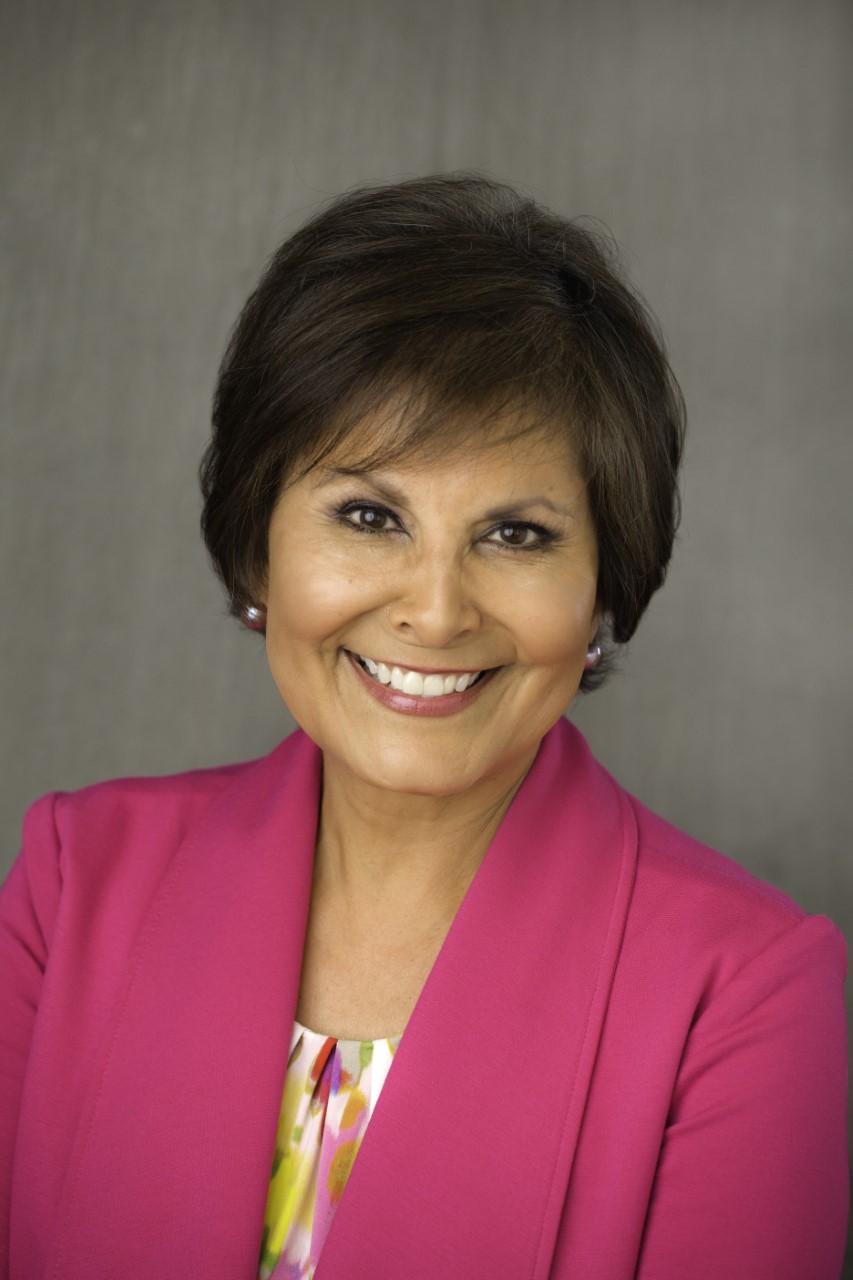 Retired television journalist Gloria Campos was born in San Benito, Texas and raised in Harlingen, Texas. She has enjoyed a long and illustrious career and is regarded as a pioneer for Hispanic journalists.

When asked about her education in the Harlingen Consolidated Independent School District, she said she had an excellent foundation, starting at Stephen F. Austin Elementary School. She loved all her teachers, but Mrs. Van Ness and Mrs. Trotter hold special places in her heart. Gloria describes Mrs. Van Ness as “sweet and kind, a loving teacher” while she attributes Mrs. Trotter for giving her an appreciation for art and music, introducing her to square dancing and providing enrichment such as attending the San Antonio Symphony concert.

During her high school years, at home on her family’s television set, Gloria witnessed major national events such as Dr. Martin Luther King, Jr.’s “I Have a Dream” speech in August of 1963 and the President John F. Kennedy assassination in November of 1963. Dr. King’s words, “I have a dream that my four little children will one day live in a nation where they will not be judged by the color of their skin but by the content of their character” has stuck with her to this day. She has always placed an importance on respecting others.

It’s around that time, while attending Harlingen High School, that Gloria initially started thinking about journalism. Interviewing students for stories when she was on the yearbook staff and newspaper staff gave her a taste of what it would be like to be a reporter. That’s all she aspired to be, a reporter, not an anchorwoman, but fate led her in another direction and exceeded her expectations.

In high school, Mrs. Gene Yates influenced her the most. Although she wasn’t necessarily encouraged to pursue higher education, Gloria chose Mrs. Yates’ alma mater, Southwest Texas State University (now named Texas State University) to obtain her Bachelor of Arts degree in Journalism. She continues to support her alma mater by serving as immediate past chair of the Texas State Development Foundation, which raises money for scholarships, and creating the Gloria Campos Endowed Scholarship in Mass Communication to assist underserved and under-represented Latino students.

After graduating from college, Gloria was thrilled to come back to Harlingen to accept an intern position with KGBT in the mid-70s. It was there that she met her husband, Lance Brown, who was the sportscaster alongside her on the anchor desk. They will celebrate 45 years of marriage this November. They have two twin sons, Gregory Edward and Anthony Drew.

Although the Rio Grande Valley wasn’t a large market, KGBT made lots of advances, such as moving from film to videotape, having a live van, and using a helicopter for news coverage. Gloria spent approximately 10 years working for KGBT before deciding to move to Dallas to work for ABC affiliate WFAA in September 1984. Her first job at WFAA was as a general assignments reporter, and she worked her way up over the 20-year span of her tenure there. She anchored every newscast except the morning cast (noon, 5 pm, 6 pm, 10 pm, and weekend newscasts). In 1990, Gloria became the first Hispanic of any gender to co-anchor 6 pm weekday newscasts in the Dallas-Fort Worth metroplex. She was also well known for producing “Wednesday’s Child” where she helped abused and neglected children in the care of the Texas Department of Family and Protective Services get fostered or adopted, which she did for 17 years.

To students aspiring to be in the news business, Gloria advises, “You need to have your eyes wide open. Be aware and versatile, adaptable, and ready to change.” Although broadcast journalism can be competitive, she says, “it’s not all about you. You need to temper that ambition to be willing to be a team player.” She describes her greatest strengths as working with people from all types of backgrounds and adapting to ever-changing technologies in the workplace.

Gloria highly recommends a public school education, but also believes parents should be partners in the education of their children. Parents should strive to be involved, whether by participating in the Parent-Teacher Association (PTA) or helping with homework and just being there when their children need them. She recalls that her parents were always very supportive and knows not everyone has that luxury.

Family has always been important to Gloria. Finding a work-life balance takes a lot of work and dedication. She says sometimes family should take precedence and other times your job will, but the key is to not let one take over the other. As her little sister, I can’t tell you how many people have told me that they have looked up to Gloria or were inspired by her. She has been a role model to so many for a very long time. I am proud to be her sister and to write this alumni feature about her.