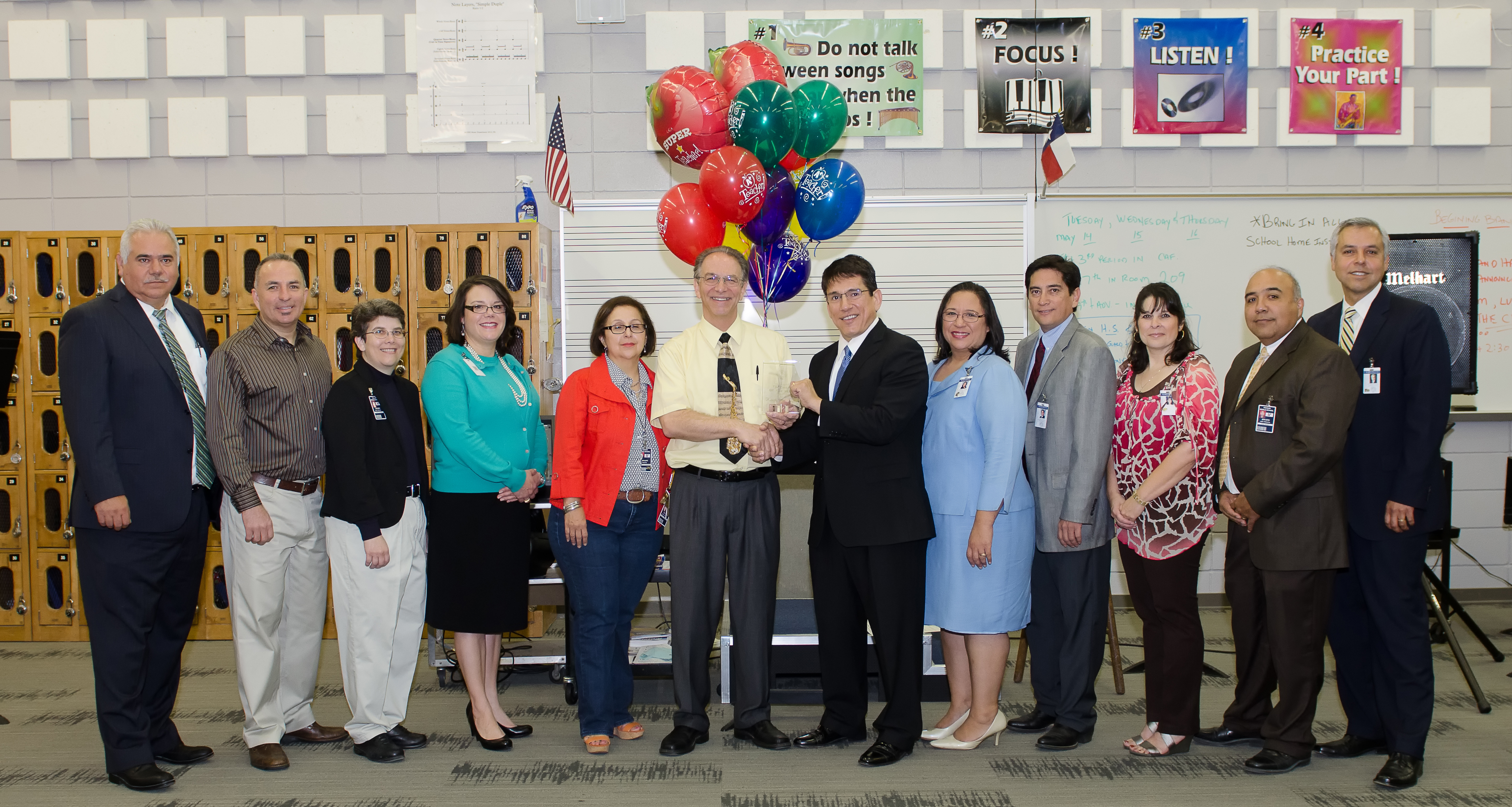 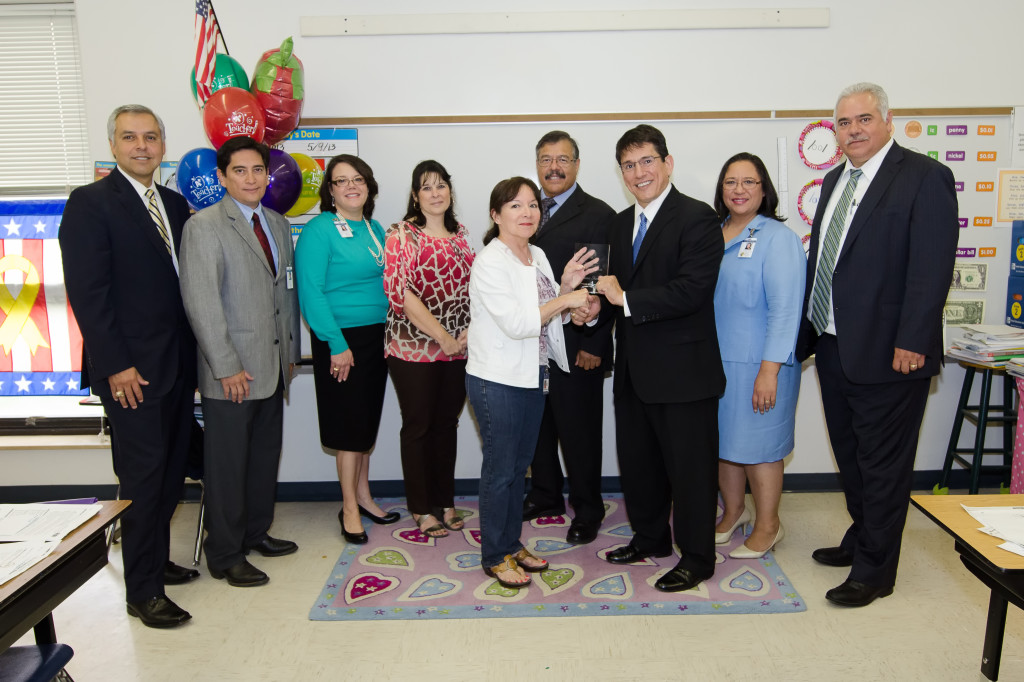 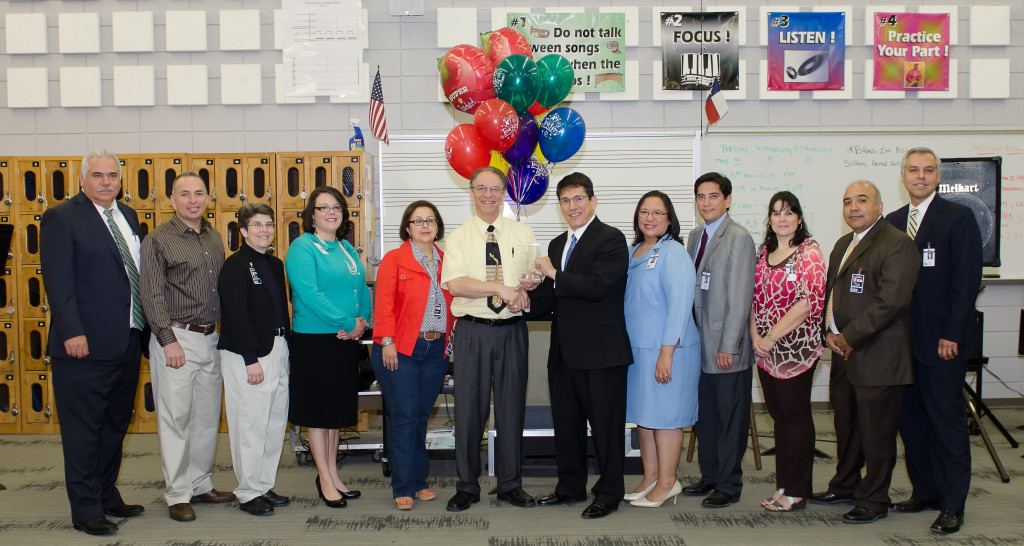 When superintendents and administrators walked into the classrooms of Sam Houston Elementary teacher Roxanna Shimotsu and Vernon Middle School Head Band Director Keith Di Santis, they had no clue they were about to receive one of the highest honors for an educator at the Harlingen Consolidated Independent School District.

Shimotsu and Di Santis were named HCISD’s Teachers of the Year (TOY) on May 9. Shimotsu, who teaches bilingual second grade, was named TOY for elementary campuses, and Di Santis was awarded for the title for secondary campuses. With their title, they will also be the district’s two selections for the Region One Teacher of the Year competition.

“I’m speechless,” said Shimotsu. “It’s a huge responsibility that goes in with this. I am so thankful to my colleagues for nominating me. I share this with all of the teachers in Harlingen, because they have helped me become the person that I am.”

“I think it’s amazing,” said Di Santis.  “This is a really big surprise, and I think I’m speechless. I love to teach. I love these kids.”

Shimotsu has been an educator for 26 years and has always specialized in bilingual education. She was inspired to pursue teaching after seeing so many of her family members, including her mother, select education as their career path. Even when she was a child, she tutored and helped the other students at school, she said. As for her specialty in Bilingual Education, Shimotsu credits her years in Brazil and Honduras with driving her to consider the specialized area.

“I look forward to the days when students learn something new and the light bulb goes off,” said Shimotsu. “My goal is to keep them wanting to learn more.”

This year, Shimotsu not only advocated for students at HCISD but for students in Texas by providing testimony on their behalf in the school finance trial. State District Judge John Dietz later recalled her statements as he ruled in favor of more than 600 school districts on all of their major claims against the state’s school finance system.

“Because of teachers like Mrs. Shimotsu and Mr. Di Santis, our students and district are headed towards a brighter future,” said HCISD Superintendent Dr. Steve Flores. “These teachers reach success in their classrooms because they engage students. They teach in a way that facilitates collaboration between the student and teacher for the benefit of learning. Our teachers allow our students to realize their dreams.”

Di Santis has served as a music educator for over 30 years, and has helped the students at Vernon create beautiful music for the past eight. His interest in teaching began when he was a member of his high school band.

In high school, he had the opportunity to take lessons with Michael Guerra, the first clarinetist of the Philadelphia Orchestra, and give private lessons to other students. Through giving and receiving these lessons, he had the opportunity to get to know each student personally. Throughout his initial experiences as a teacher, he was able to see the impact he had on students as they pursued musical talents.

“The beautiful music the students learn to make together is just the beginning of the learning process,” said Di Santis. “The skills they learn in band will help them to be successful in all of their endeavors, and I am blessed to be a part of that process.”

Throughout Di Santis’ time at Vernon, he has seen the students improve both musically and academically, he said. This year, the band recently made their mark in Vernon history by earning a total of 24 chair positions at the All City Band Auditions on Nov. 13. It is the highest number the campus has ever received, and is more than double the number of chairs awarded eight years ago.

Their students also shared the excitement for their teacher by cheering once they heard the good news.

“He (Di Santis) deserves it,” said Jeremy Khoo, seventh grade student. “He’s a very committed teacher. He wants us to strive for our best, and he’s giving us the best opportunities here in band.”

“She (Shimotsu) is the best and kindest teacher,” said Diego Jimenez. “I like to follow her directions and be nice to others. Congratulations, Mrs. Shimotsu.”