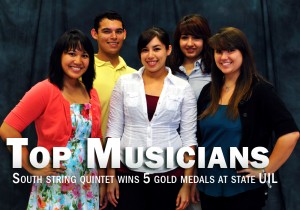 “Megan and I were the first to see the posted results because everyone else went to lunch,” South Orchestra Director Jason Hooper said. “When she told the others that we had received a one, they didn’t believe her. They wanted her to take a picture.”

The state UIL competition is the culmination of 20,000 student musicians performing to a one-judge panel. The judge for the quintet had been giving low scores of four and five all day, Hooper said.

Only one other quintet ensemble took gold, the group said.

“Our piece was St. Paul’s Suite, the fourth movement,” Salazar said. “It’s a complicated piece of music because its in two different meters, so the two melodies collide together. We need to be able to match them up.”

The four girls in the award-winning ensemble competed together in 2010, adding Gonzalez this past year. The group practiced before and after school, any time they could coordinate between their schedules and find space.

“It’s difficult balancing music with school, but it’s not impossible,” Soto said. “You have to cut back on TV time and computer to and know how to find a balance. But it’s worth it because it’s fun.”

The enjoyment of music was a shared sentiment across the group. But Mendoza’s most memorable moment with South Orchestra was a bit frightening, she said. “My favorite memory would be our last concert this spring, because it was our longest and because I got to conduct,” Mendoza said. “It was scary. I was shaking. I didn’t think it would be that scary but it was.”