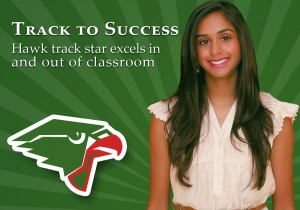 Life as a senior at Harlingen High School South yielded an important lesson for Zariah Noyola. It’s not always easy.

The Hawk student athlete battled with a back injury, which inflicted pain when she was sitting down. Imagine what it must have been like running hurdles.

“My whole season, my sciatic nerve hurt, cutting back on my times and the quality of my runs,” Noyola said. “It was really a big struggle. I was lucky because it could have been worse, but it definitely affected me throughout the year.”

Despite the injury, Noyola placed fifth in the 300-meter hurdles earlier this month at the Texas State Track Meet.

“It’s super intense, competing in Austin,” Noyola said. “There’s so many people there watching you. It’s kind of scary. You just need to tell yourself to run hard and you have to believe in yourself.”

Life as a student athlete is difficult, but Noyola seems to find a way to balance practice and homework. In fact, she has been a model student athlete during her time at South, finishing her high school career no. 7 in the class.

“We have track meets on Friday, which can be hard because we have to focus on the meet, but at the same time, we have to keep up with our school work,” Noyola said. “It was hard, but I got through it.”

Harlingen Consolidated Independent School District has an annual tradition where they advertise the top 10 students in the graduating class on billboards throughout the city. The Hawk billboard currently hangs over Lincoln Avenue on the Westside of the expressway.

“Making the top 10 was one of my goals when I got to high school,” Noyola said. “I wanted to make it to state for track and be on the billboard.”

After stepping off the graduation stage this Saturday, Noyola will be set to join the track team at University of Incarnate Word in San Antonio. She received a track scholarship to the school, signing her letter of intent in the fall of