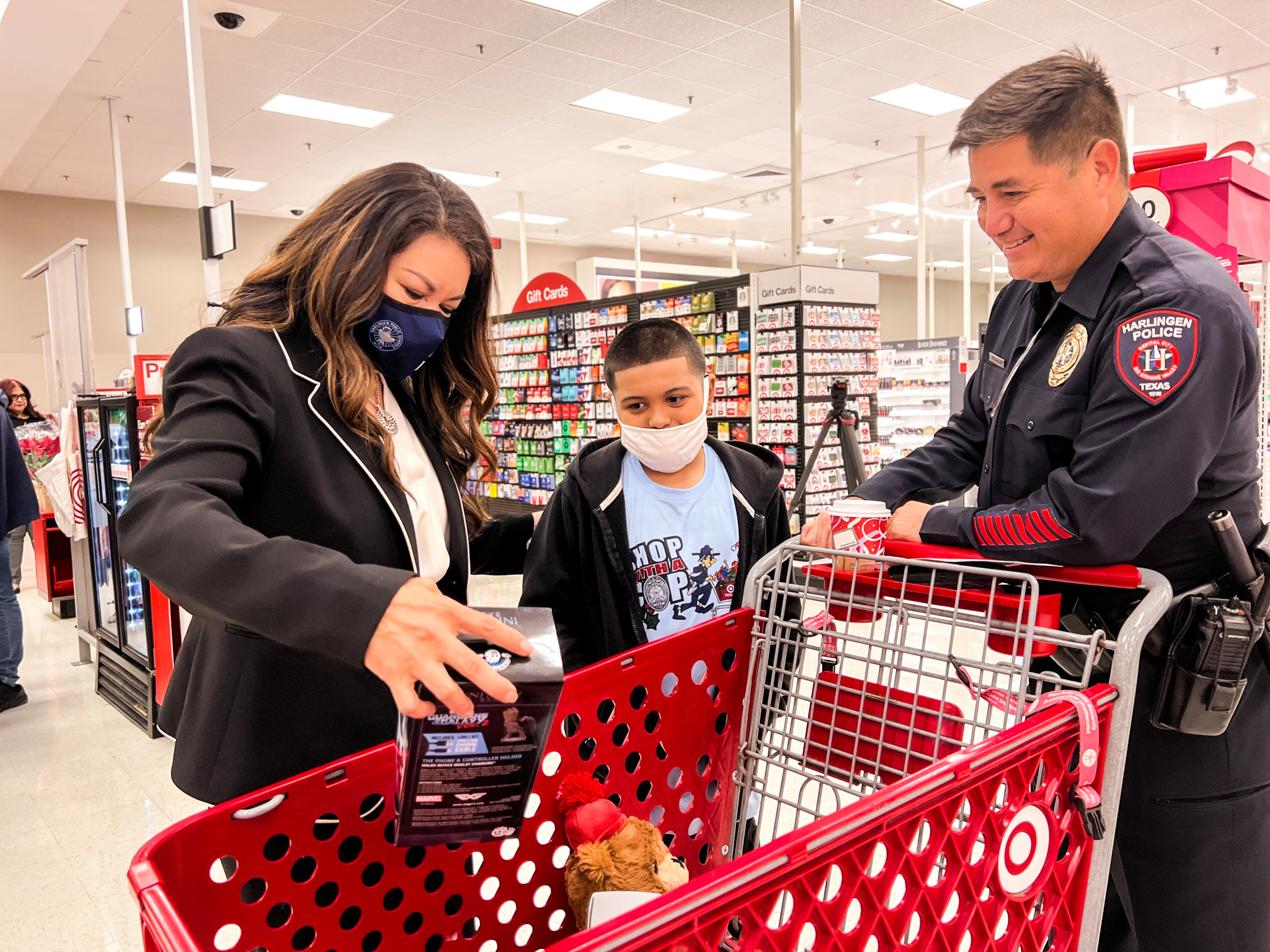 As students arrived to Target for the shopping spree on December 8, they first partnered up with a police officer.

“This is probably the best event of the year,” Harlingen Police Department Sergeant Jaime Palafox said. “The community outreach, the connection with the children, is way more important than doing all the other everyday stuff. I can tell you that there is a whole bunch of cops out here that are big, strong, burly guys, and every single one of us melts at this event. We look forward to it every year.”

Before the shopping began, students and their police partners took pictures with Blue Santa outside the store.

“I see the smiles on their faces, interact with them, have a little conversation, and bring a little cheer,” Blue Santa Carey Shamlian said. “If this just gives them a few minutes to laugh and be themselves, then I’ve done my job.”

The annual event provides students with an opportunity to meet local law enforcement officers and get to know who they are beyond the badge.

Superintendent Dr. Alicia Noyola visited with students throughout the store as they shopped.

“Many years ago, we brought in a number of law enforcement folks into the school district because we really wanted to build a partnership with law enforcement,” Dr. Noyola said. “Beyond just learning about the role of an officer in serving and protecting kids, more importantly, we wanted them to build relationships. Today is just an extension of that.”

Inspired by the spirit of giving, as students began adding items into their shopping carts, some shopped for their families too.

“Well, I got some stuff for me and my sisters,” Crocket Elementary fifth-grader Alli Sanchez said. “This one is for me since I like this game, but I will share with one of my older sisters. This Baby Yoda is for my little sister. Those Pop It toys are for all my sisters because they like those. I am going to give them these gifts as soon as I get home. They weren’t expecting all of this. I feel excited because me and my best friend were waiting for this day.”

While some students knew exactly what they wanted as soon as they walked into the store, others spent their time carefully browsing before making their final selections.

“He is a good shopper,” Assistant Chief Miryam Anderson said. “He decided to look at everything first and then come back to make his selections.”

Later, Espinoza filled his cart with toys, including several cars.

“This car is for me because I really like the movie Fast and Furious,” Espinoza said as he picked up one of the toys.

He also chose to buy two police cars as a way to preserve the memory of this special shopping spree.

Austin Elementary fifth-grader Noah Camacho stood in one of the toy isles, excited to have found a very good deal.

The joy of the students, the officers, and everyone else involved in this event was evident throughout the store.

“It’s great to be able to shop with a police officer, and I am very thankful because I like this,” Ben Milam fifth-grader Henry Del Angel said.