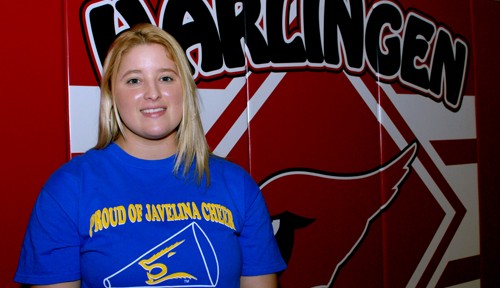 When Kimberlee Zwiers auditioned for the opportunity to reach her goal of being a college cheerleader, she had her older sister by her side.

The tryouts for the Texas A&M University Kingsville cheerleading squad were tough with four hours of intense practice that including cheering, dancing, stunts and tumbling, Zwiers said.

With three years of experience on the cheerleading squad, Ashlee Danielle Zwiers proved to be a perfect mentor to her younger sister, who was selected to be on the TAMUK squad this fall.

“I always wanted to cheer in college no matter where I went,” said Kimberlee, a senior at Harlingen High School. “Being able to go to Kingsville, a school I want to be at, is amazing.”

Zwiers has been cheering since she was in eighth grade, she said. She loves the tumbling and the football crowds.

“I’m going to miss the Cardinal football games,” she said. “Seeing all of our fans there. When we start a cheer, the fans go along with it. On other teams, the fans will yell over the cheerleaders, or not going along with the cheer. It’s really special.”

Although she expects next year to be fun and exciting, Zwiers will also get down to work on her dream career. She plans to study animal science, hoping to attend veterinary school, she said.

“I hate seeing animals out on the street, injured,” she said. “I have four dogs, and I used to have a sheep. I know how to care for them, but I’d like to learn more.”

A member of Student Council, Future Farmers of America, PTSA and Rotary, Zwiers will be leaving a lot behind next year. Most of all, she expects to miss her friends, she said.

“The girls are really close this year,” Zwiers said. “I’m going to miss the close bond we have next year.”