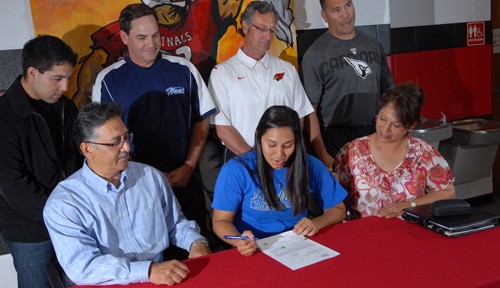 Cardinal senior Krista Leal is sure to continue soaring as a Texas A&M University-Kingsville Javelina next year.

The four time All-District selection for catcher signed her letter of intent Tuesday afternoon to continue her career at TAMUK.

“I’ve been looking forward to this day for a really long time,” Leal said. “I’m really happy and excited. I’m ready to go on to Kingsville.”

Leal batted over .500 this season with six home runs. She is a two time All-Valley Team selection and she was the 2011 All Valley Offensive Player of the Year.

“When you have a player this caliber, you know that you’re fortunate because they don’t come around too often,” Harlingen High School softball coach Lance White said. “Every year she got better as a player and she’s always been a great person.”

TAMUK offered Leal proximity to her home, which influenced her decision to join the Javelina squad, she said. The school also offers a nursing program, which Leal plans to study.

“(TAMUK coaches) thought I was a great player,” Leal said. “The coaches want to win and I want to be there for that.”

The Javelinas compete in the Lone Star Conference in the NCAA Division II.