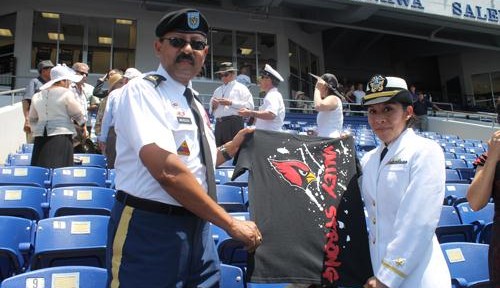 When U.S. Secretary of Defense Leon Panetta shook her hand, tears began to well up in Diana Barrera’s eyes as she walked the graduation stage of the U.S. Naval Academy in Annapolis, Md.

A 2008 graduate of Harlingen High School, Barrera earned an officer ranking of ensign with her graduation of the Naval Academy, a rare accomplishment for an Hispanic female, she said.

“All these important officers were there,” she said when describing graduation. “It didn’t hit me that I was graduating until I saw Secretary Penetta on the stage. I don’t know what happened, but everything just weighed down on me. Then, my parents, who didn’t want me to go to that school, were standing there proudly for me.”

Barrera had options for college, she said. Her decision needed to be based on financial aid, and she received full scholarships for academics and JROTC through various public universities across Texas. She also received an appointment to West Point, the prestigious military academy in New York.

“I didn’t think I was going to get in (to the Naval Academy) because it’s so prestigious,” she said. “I applied any way, but didn’t take it seriously until I received a recommendation from my Congressman.”

The process for applying to a service academy differs from the normal college application, she said. Applicants must begin the process during their junior year of college, filing a preliminary application. Then, applicants are required to apply for a nomination, usually a Congressman. Candidates must also complete a medical, fitness and interview assessment before being considered for admission.

“I was competing against some of the brightest kids in the country,” she said. “I think 15,000 candidates apply and only 1,000 students are admitted.”

Barrera grew comfortable with the academy’s regimented lifestyle, she said. She liked having time set aside in her day for exercise and playing a club sport. But balancing life as a Midshipman, a student and a young woman living 1,700 miles away from home.

“It’s like a whole year of boot camp. They just beat up on you,” she said. “The upperclassman order you around. You juggle that with your academics and your personal life. As I got older, I learned how to cope with the stress better.”

Engineering threw Barrea for a loop, she said. As an English major, she didn’t expect to need to know about logistics and mechanics. But the Naval Academy graduates everyone with a Bachelors of Science, even if they major in a humanities subject.

“Principals of propulsion was one of my hardest classes,” she said. “It was the study of how naval ships work. To me, it all looked like Chinese.”

Barrera leaves this July for her ship USS Gonzalez, she said. She will be deploying to the Mediterranean Sea in December or January.

“I’m very proud of who I am today,” she said “If it wasn’t for my roots and humble beginnings, I wouldn’t be who I am. I know a lot of people count on me. So I carry that all with me.