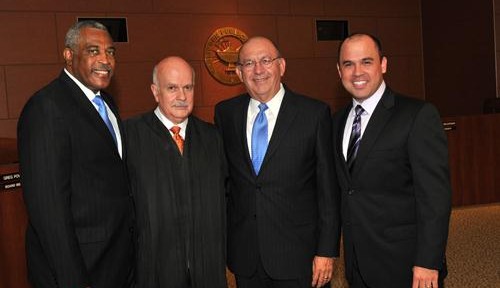 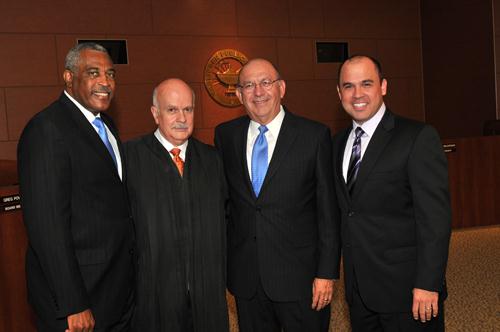 The Harlingen Consolidated Independent School District Board of Trustees restructured its board during Monday night’s special meeting.

The board appointed Dr. Cesar Maldonado to serve as board president for the 2012-2013 school year, replacing Gerry Fleuriet. The board also named George McShan as the new vice president and Javier De Leon as the new secretary.

“As I begin my 10th year as trustee, I will continue to support the transformation of HCISD to 21st Century learning,” Dr. Maldonado said. “By integrating technology into education, promoting college readiness, and expanding opportunities for all students, we can reach a much higher level of student achievement. HCISD has already made great progress and is poised to be a leader in the reinventing of education.”

Dr. Maldonado serves Texas State Technical College in Harlingen as president. He also holds the title of Vice Chancellor of Institutional Research for the TSTC system. He earned re-election this Spring after running unopposed.

“It’s been an honor and a privilege to serve with this high order of professionals,” Fleuriet said. “Our district has been known for decades has having board members who are outstanding, coming to serve the children rather than a personal agenda. This has been by far my most exciting year on the board because everyone has been so committed to moving exponentially fast and to doing things in a better way.”

Fleuriet, a 16-year board member, is a Harlingen native and Harlingen High School graduate.

“This has been a wonderful school year for us,” Superintendent Dr. Steve Flores said. “Her passion for students is unrivaled. She’s committed to innovation, and she understands incremental versus exponential change. We are fortunate to have her as one of our district’s leaders.”

Three members were sworn in for additional three-year terms, after winning re-election earlier this Spring. Dr. Maldanado and McShan were joined by Dr. Nolan Perez in being sworn in by U.S. District Judge Ricardo Hinojosa, chief judge for the Southern District of Texas. All three trustees were unopposed in election.
Click here to view photos from the meeting.