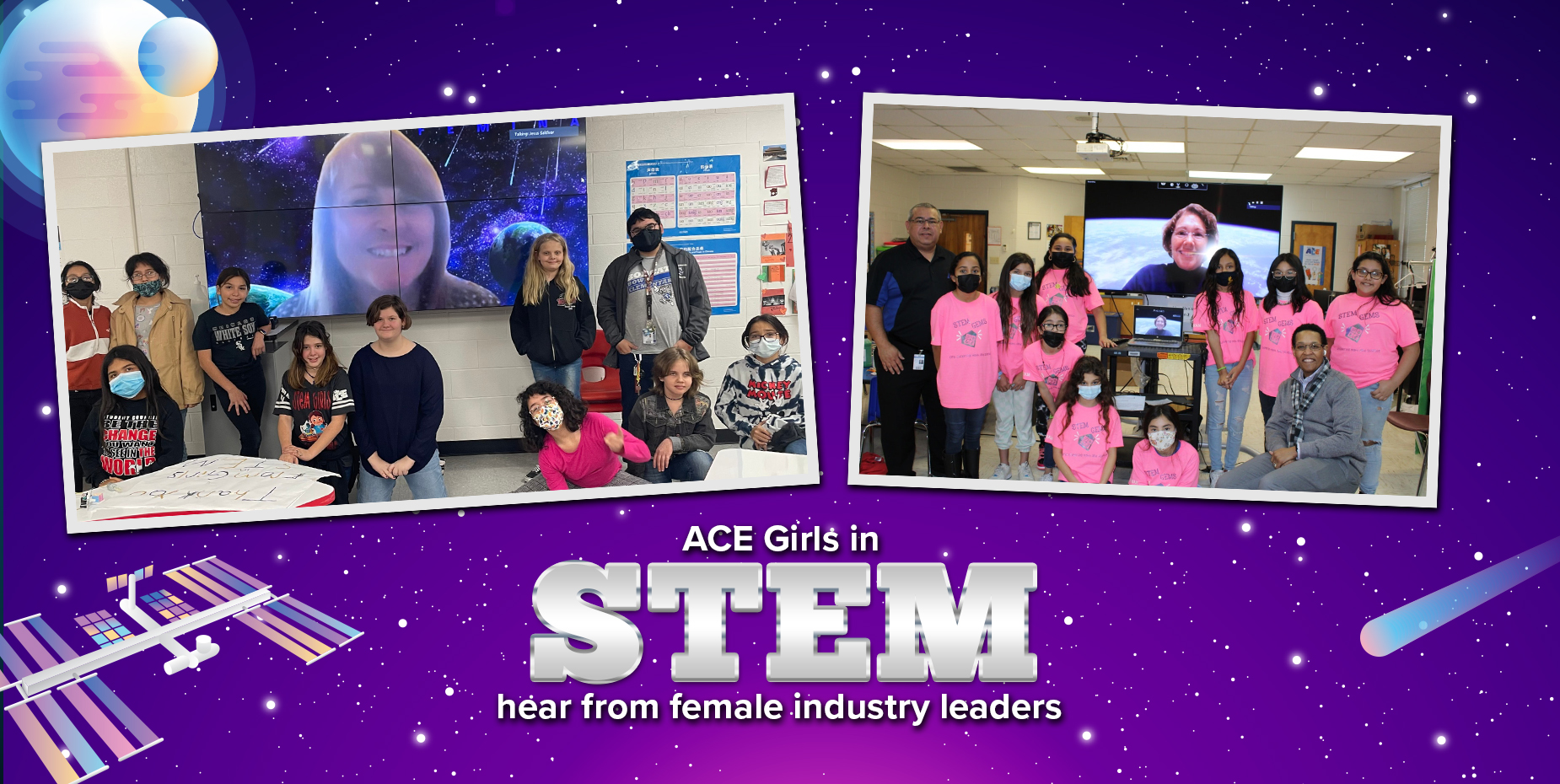 As the Girls in STEM program expands to more ACE campuses across the district, the Afterschool Centers on Education program at Harlingen CISD has partnered up with Astra Femina, a non-profit organization that helps to promote the STEM field to girls.

Astra Femina is comprised of a collection of leaders including astronauts, academic professors, and industry innovators. Two of these leaders virtually visited HCISD in February.

Dr. Sandra Magnus and Virginia Barnes shared their stories, along with some powerful words and advice, with the Girls in STEM.

On February 9, the elementary groups heard from Dr. Sandra Magnus, an astronaut and engineer.

“The idea of flying in space and getting to see the Earth from space and doing something that is pushing the boundaries of human knowledge, those were all the things that captured my imagination,” Magnus said. “Being an astronaut is a lot like being in school because I had to learn so many different things. I flew the first time in 2002 and then in 2008 I lived on the space station for four and a half months. Then I was on the very last shuttle mission 10 years ago. I really have enjoyed my career in STEM. Ever since I was young, I really enjoyed math and science. Somewhere around when I was 11 or 12-years-old is when I decided that I wanted to be an astronaut, and I had no idea if I could do it or not. I grew up in a small town in southern Illinois, and I decided I was just going to go for it and see what happens.”

The Girls in STEM teams from Bonham Elementary, Crockett Elementary, Long Elementary, and Rodriguez Elementary sat, each at their own campus, listening to Dr. Magnus speak.

Before the presentation, the STEM Gems, the team at Bonham Elementary presented a civil engineering project they had been working on.

“Hello Dr. Magnus,” Bonham fifth-grader Lily Bonilla said. “Thank you for your time. Our topic was civil engineering. We researched and learned that civil engineers are responsible for a lot of things that are required for a society to function properly like buildings, safe water supply, sewage treatments, wells, and roadways. We decided that our project would be to build STEM city.”

The elementary girls shared how they were working on a blueprint to plan out where to place the houses, stores, farms, police and fires stations, and other important locations in their city.

“You are actually putting one small step into the space world by thinking about the projects and the engineering that you are doing,” Dr. Magnus said. “I am really super excited that you get to practice engineering even in grade school the way you do because I didn’t have that opportunity.”

Dr. Magnus ended her presentation by inspiring the girls to believe in themselves.

“No one in my family was in the STEM area, and I had no clue if this was something that I could do or not.” Dr. Magnus said. “This was my dream and I wanted to just try. There was nothing really special about me, I was just a curious kid with a dream. So, I would encourage you that no matter what you want to do – whether it’s to fly in space, or be a doctor, a journalist, a nurse, President of the United States, or an engineer. I mean just whatever it is that you decide that you want to do, I want you to believe in yourself, and I want you to go for it because you just never know what’s possible unless you give it a try.”

On February 8, the middle school Girls in STEM groups heard from Virginia Barnes who retired from the Boeing Company as Vice President of the Space Launch System program.

“My dad was in construction, so we moved a lot,” Barnes said. “I went to 15 different elementary schools. I joined teams like you are doing here, only they did not have teams like yours, and I always asked why which is one of the things that helped me succeed. I didn’t just take things on their surface. I wanted to understand it. At that time, I had decided I wanted to be a veterinarian. It is something I had seen; it is something that I thought I could do. My parents had not gone to college. So, I found resources all around me in teachers, in counselors, in the community.”

The teams from Vernon Middle School World Languages Academy and Gutierrez Middle School of Arts and Sciences sat at their respective campuses, listening to the virtual presentation.

Before the presentation, the Mustang team from Vernon presented a mechanical engineering project they had been working on which consisted of constructing a Ferris wheel using popsicle sticks, cardboard, and a motor.

During her presentation, Barnes talked about projects that she worked on, including working on the International Space Station.

“I literally have my fingerprints all over that orbiting laboratory,” Barnes said.

She went on to encourage the girls in the audience to follow their dreams.

“I held positions at the Boeing company first in accounting and finance,” Barnes said. “You don’t have to be the astronaut or the engineer to support something as cool as space. You can be the communicator. You can be the journalist. You can be the photographer. There are a lot of other great things you can do in other STEM fields as well.”

Both sessions ended with a Q&A session where the girls were able to ask the speaker questions.

Barnes responded with, “It was all a happy accident,” and then explained how although she was not an engineer, she was observant and always had an interest in learning.

Towards the end of her presentation, Barnes told the Girls in STEM, “You can be some of the first people to set foot on Mars. Do we have any takers out there?”

Gonzalez eagerly raised her hand up in response.