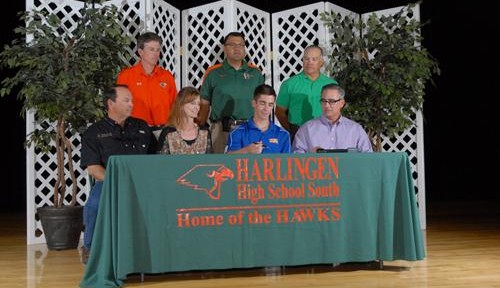 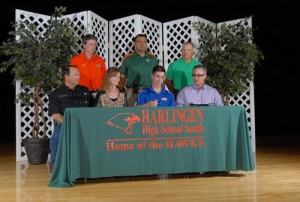 The District 31-5A record holder for pole vaulting has found his next challenge to leap.

“It’s always been a goal of mine,” said White, who holds the district record with a jump of 15 feet and six inches. “It’s been a dream to jump at the next level. I feel like my hard work has all paid off now.”

According to DyeStat and ESPN.com, White’s best jump ranks no. 20 in the state and no. 56 in the nation this year. He finished eighth at last year’s University Interscholastic League (UIL) state track meet and third in this year’s regional meet.

White, who has been a two-time winner at the UIL district meet, has some lofty goals for his four years with the Mavericks, he said. He hopes to clear 17-feet, and he hopes to qualify for the NCAA national track meet.

“(UTA) has some great vaulters, and some great history,” White said. “I feel honored to be a part of their program.”

Being able to produce division one athletes helps a program build and sustain talent, HHSS track coach Ralph De La Rosa said. He hopes the example set by White will inspire other student athletes to dream big when they join the Hawk track team.

“Blake is an extremely dedicated student athlete,” De La Rosa said. “He’s really good in the classroom. He’s a leader as a vaulter and with the track team.”

The UTA Mavericks compete in the Southland Conference in NCAA division one.