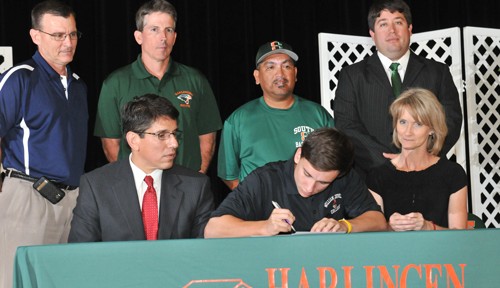 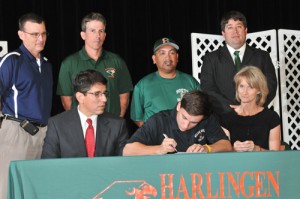 From a boy playing little league to a young man ready for graduation, Harlingen High School South senior Zachary Flores announced the next step in his baseball and academic career Wednesday afternoon.

Flores signed his letter of intent to play baseball at William Jewell College, a Division II program in Liberty, Mo., next fall.

“This has been a breath of fresh air,” Flores said. “I’ve been working towards this ever since I can remember. This makes everything worth it. I want to thank my parents for driving me and supporting me all these years, and my teammates for being here for me today.”

“Zach has worked his tail off,” HHSS baseball coach Tony Leal said. “This wasn’t about just one month of work. There’s been some good times and bad times, like anything else. But he’s been able to persevere. He has an amazing opportunity right now athletically and academically.”

Leal expects more current Hawk players to to pursue playing at the collegian level in the near future, he said. Being able to feature a student athlete like Flores will only help increase the program’s visibility.

“This is what we want from our athletics program,” Lanny Wilson, the athletic coordinator at HHSS, said. “We want to be successful enough to get college paid for and to get recognition for our school. Good things are coming for our program and for Zach.”

In the summer, Flores has played on the D-BAT Mustangs, a top rated summer baseball program based in Dallas, for the past two years. He has played at HHSS since his freshman season.

“It was an exciting day for Zachary, our family and Harlingen High School South,” said Amy Flores, Zach’s mom. “He’s been working on his skills since he was very little, so it’s great to see that hard work pay off.”

Parents of student athletes should make sure their child has the drive to play their sport at the next level, Amy said. The work ethic has to be something that comes from the child because it takes a lot of hours and dedication to be successful.

Flores is the son of two Harlingen Consolidated Independent School District employees. Amy is a fifth grade teacher at Treasure Hills Elementary and Dr. Steve Flores is the superintendent of schools.