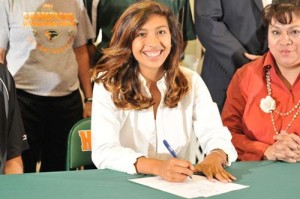 Senior Sydney Herrera signed her letter of intent to play college volleyball at Our Lady of the Lake University in San Antonio Wednesday afternoon in the HHSS gymnasium.

“It’s a blessing to be able to go out and play at the next level,” Herrera said. “I’ve worked so hard since eighth grade. It’s a great feeling.”

Herrera, a middle blocker on the Hawk squad, is a two time District 31-5A Defensive Player of the Year. She was a leader on a team that won bi-district and area championships, reaching the state regional quarterfinals.

“(Herrera) is continuing a tradition here at South because we’ve had several girls over the years who went on to play in college,” said HHSS coach Lupe Garza. “I’m excited for her. She deserves this because she works hard and plays hard.”

Herrera averaged 4.7 blocks and 2.4 kills per game in her senior season. She also made the All-Tournament teams atthe Mission and PSJA tournaments.

“As a student athlete, you can never give up if you want to play at the next level,” Herrera said. “Volleyball is a game of mistakes. You need to be able to limit your mistakes and never stop playing to be successful.”