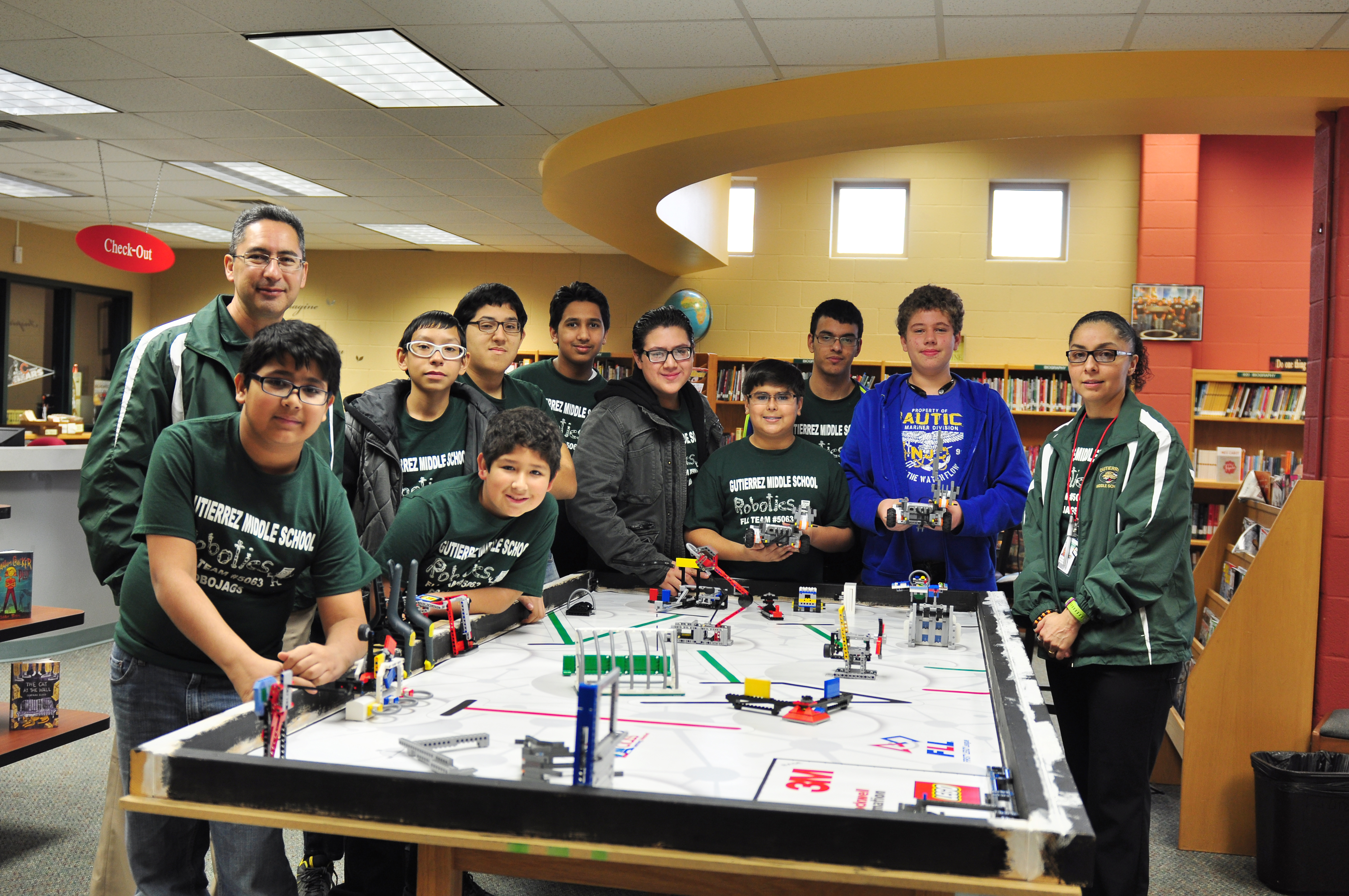 In their first year as a robotics team, members of the Gutierrez Middle School RoboJags, have learned that hard work, problem-solving, and teamwork can take them far.

“In the last competition we had a lot of time left over, so we’re going to use that time to take on more challenges,” said eighth grade programmer Juan Perez. “We were able to tackle quite a few tasks on the course, so to correct the ones we didn’t do well in, we’re creating programs to actually accomplish them.”

In FIRST there are three parts to the competition: the Robot Game, the Project, and FLL Core Values. Students participate in the challenge by programming an autonomous robot to score points on a playing field (Robot Game), developing a solution to a problem they have identified (Project), all guided by the FLL Core Values.

At the regional competition, the goal will remain the same – to accomplish as many tasks as possible within two and a half minutes. The more challenges teams complete the more points they will accumulate.

Team sponsor, Edmundo Lopez explains that there are many variables that the team must deal with, such as, battery life, programming, and angles. Students must visualize what they want the robot to accomplish in their minds. Even a fraction of an inch off in the robot’s positioning could determine if the robot is successful in completing the task.

Though they’ve come a long way, team sponsor, Veronica Baca acknowledges that the road to regionals has not been easy for them.

“The week before the last competition you could tell that the students were stressed because the programming wasn’t going right, and an attachment wasn’t working,” said Baca. “It took some trial and error. The students had to apply strategy in solving the problem, so there is more to the competition than just building the robot. In the end, they were successful and shocked everyone when they scored as high as they did in the robot competition.”

The team is grateful for the knowledge they’ve gained from being part of the robotics team.

“We’ve learned to work as a team, and like any other team, we’ve had our disagreements,” said eighth grade team captain John William Yeupell. “So we test out all of the ideas, and the one that works best, is the one that we all agree with. We’ve learned how to regain our confidence even when things are going bad, and we just keep trying. I can tell you, at the beginning nothing worked. I think every challenge has taught us to think outside of the box.”

As the first-year team looks forward to competing against nearly 100 other schools at the regional competition in San Antonio on March 14, Perez is proud of the legacy that he and his team members have established for incoming students a Gutierrez.

“It feels awesome to have made the region competition since we are a rookie team,” said Perez. “It doesn’t matter if this is your first, second, or third year, but the fact that we made it, is a huge accomplishment and we want to pass that down to other students that come after us.”

Looking ahead, Baca is excited for the opportunity to expand the program in the coming school year as current sixth grade team members take on the role of mentors for incoming students, and eighth grade team members qualify to participate in the FIRST Tech Challenge (Grades 7-12).

In order to prepare, students will be attending a camp this summer called Reybotics, in which they will have the opportunity to work with different robots. The purpose of the camp is for team members to become familiar with the programming language and the robots that will be required for the next level of competition.

Also on February 26, in an effort to spark students’ interests in Science, Technology, Engineering and Math (STEM), Gutierrez will receive a visit from the Geekbus, a mobile makerspace that travels to schools or other organizations to provide STEM educational experiences in their classrooms. Inside the Geekbus, students will find 3D printers, robotics, electronics, and maker materials for hands-on exploring.