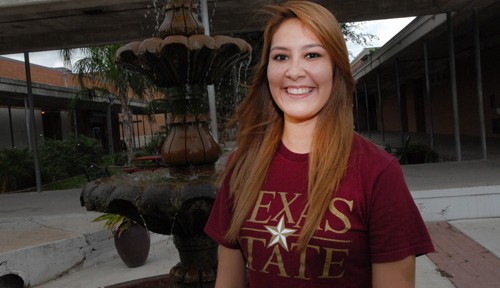 The cowgirl boots and hat won’t be coming off anytime soon for Arika Barajas, who was recently selected as a member of the Strutters, the Texas State University drill team.

The captain for the Cardettes in 2011-2012 couldn’t be happier for the opportunity to continue performing and dancing at the college level, she said.

“I was really excited to be able to keep dancing after high school,” the senior at Harlingen High School said. “I love dancing. After doing it here for four years, it’s become a passion of mine.”

During her time with the Cardettes, Barajas earned All-American Dancer honors three years in a row. She was also selected to the Kick Company for the American Dance and Drill team.

“The Cardettes have been a big influence in my life,” she said. “Without them, I wouldn’t be the dancer I am today. It pushed me, and gave me drive to be better.”

Barajas chose Texas State to study communications because she loves the mid-sized, college town feel to it, she said. She will also be a part of a drill team that’s rich in tradition, an important factor in her decision.

“At Texas State, being on the team is like being a part of a family,” she said. “So I’m looking forward to joining a new group and being a Strutter.”