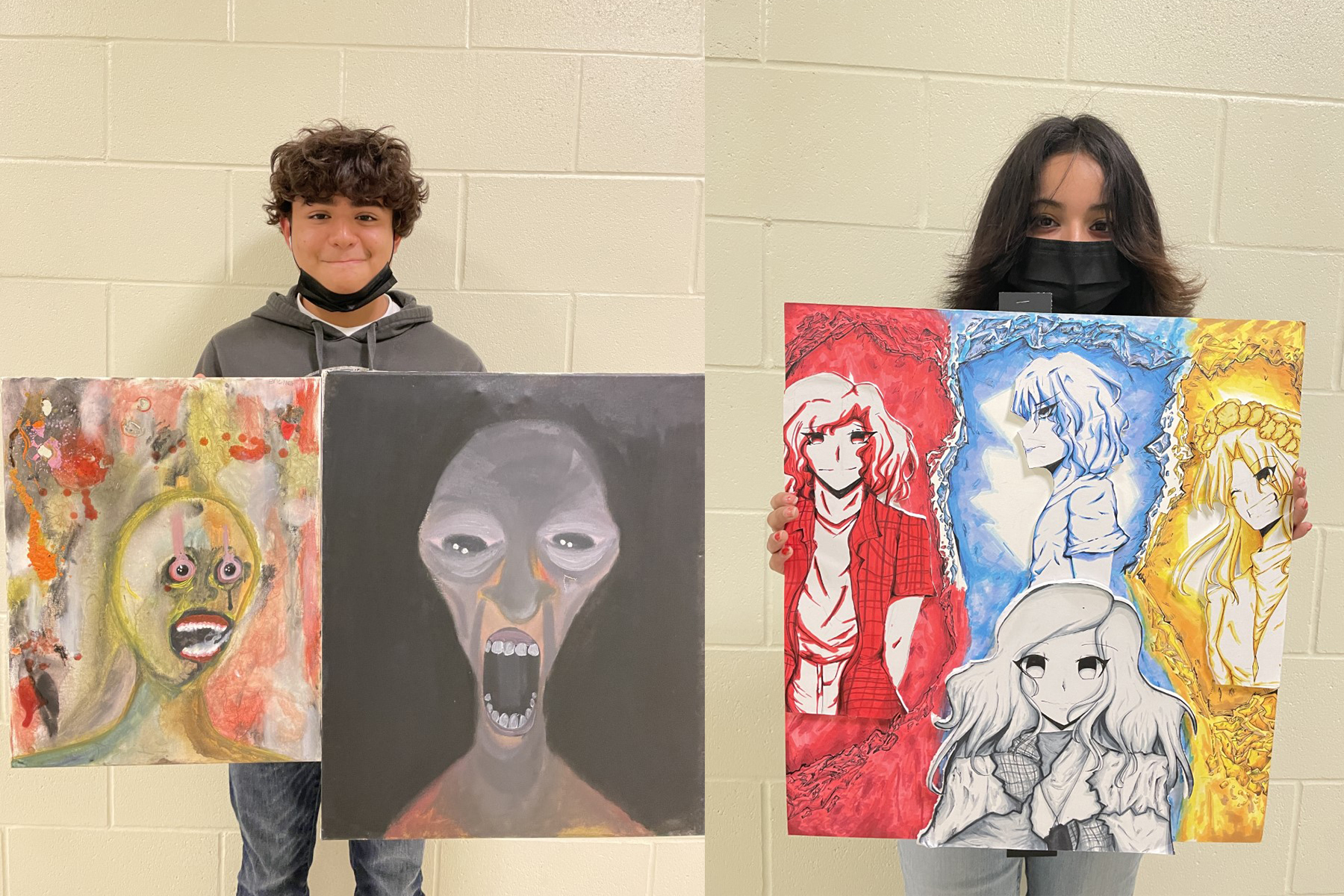 Both students received a rating of Superior, which is the highest rating possible at the regional competition.

“They competed at the Art 1 level which is 9th-12th graders enrolled in that course,” Cano art teacher Oneida Trevino said. “There were several hundred entries from Brownsville all the way to Laredo.”

The VASE competition is modeled after and aligns to the AP rubric.  In this competition, students create a piece of art, write about it, and talk about their work with a juror who evaluates their work using the standards-based rubric.

Eric Mata competed with two art pieces, both of which received the gold medal status.

His artwork, “Self-Portrait”, a face with large eyes and an open mouth on a red, orange, yellow and gray background, received a perfect score.

“I wasn’t going to enter this one,” Mata said. “I just kind of started painting. I was kind of spilling water onto the canvas and then I thought that it kind of looked like a head, so I started off with a circle here and then just made it more of that shape.”

Both of his paintings had similar features.

“Oh, well none of them really mean anything. I just like painting,” Mata said. “I guess if there was a genre for what I do it is surrealist horror. I guess I just like when you look at something and you can’t tell what it is. I don’t like making my paintings mean anything, so that way anyone can decide what it means to them when they look at it.”

Audrey Borjas has her own process when it comes to art. For the piece she submitted to competition, she began by planning out every last detail of her painting.

“At first, I kind of picked out the way they spoke and what they looked like,” Borjas said about her painting featuring four different anime characters.

Her painting titled, “Broken Glass”, is a visual representation of the mind space.

“So, this piece is about a disorder called dissociative identity disorder,” Borjas said. “I just really love this piece, and I wanted people to connect with it and hopefully reach some people who don’t understand the disorder.”

Borjas uses her art to raise awareness about mental health.

“I have been drawing since I was little,” Borjas said. “I have been fascinated by anime for a long time. I go for realism sometimes, semi-realistic, but I really connect to anime. I really love it. I just think it’s for me, and I thought it would be a good way to show this.”