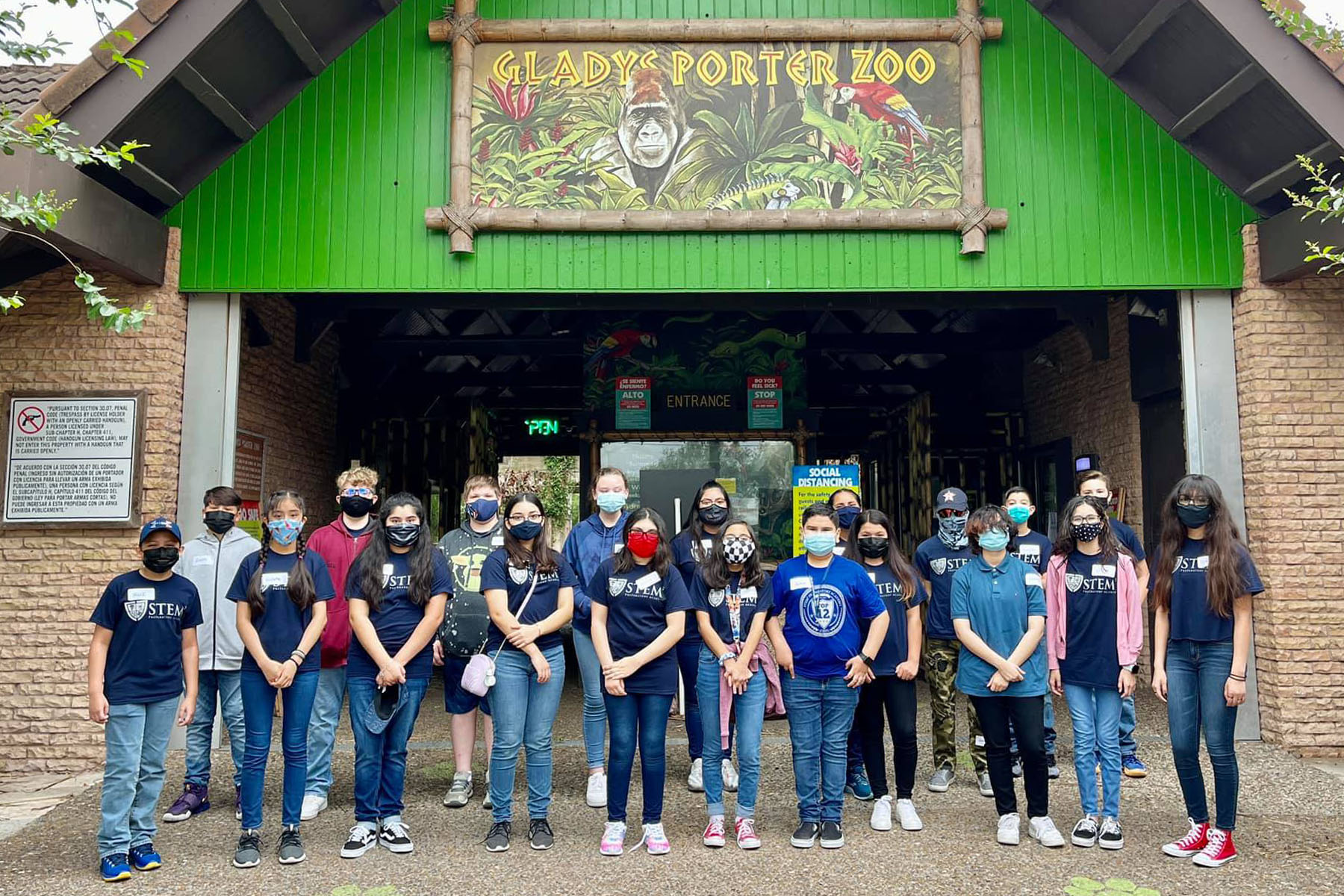 “I am a graduate student enrolled in a course that has a central aspect of research, and my mentor had an idea to create an event where we could showcase our research,” Experimental Psychology UTRGV graduate student Katelynn Renteria said. “After several meetings planning, the event evolved into a virtual symposium with UTRGV, the Gladys Porter Zoo, and HCISD being collaborators. Being able to see three different entities come together based on their genuine interest in educating the community and showcasing research was a valuable experience.”

The STEM2 scholars first designed and created custom-built enrichment projects for animals at the Gladys Porter Zoo.  Later, students visited the zoo to observe how animals interacted with their creations. Through this project opportunity, students were able to experience the engineering design process from beginning to end, and then they showcased their work at the Animal Behavior Research Symposium.

Linda Salinas, the student’s STEM2 Preparatory teacher, assisted with coordinating the research projects for the students and acted as a moderator in the virtual symposium.

For their Design and Modeling projects, students focused on animal enrichment.  They selected an animal to research, generated concepts, and took part in discussions to decide on their final project. Then, they sketched their designs and built their projects. Later, they evaluated and reflected on their projects.

“When we arrived at the zoo, my project was set up at the Ground Hornbill Exhibit,” Brashear said.  “The PVC pipe was filled with ground meat made for animals that was filled with vitamins and minerals. We didn’t see him eat. However, we circled back to the exhibit later in the day and all the food was gone.”

“With my design, the lemurs would need to spin the medicine containers filled with dry snacks so the food can fall out,” Gutierrez said. “My favorite part of the design process was when I was building my project and watching it come to life.”

“When I went to the zoo, I was able to see the giraffes try to get leaves out of the feeder,” Lopez said. “Some of them seemed nervous to use it, but one in particular really enjoyed using it. Her name was Rocket. I learned that Rocket was born in 2009 just like me.”

Emarii Martinez, a sixth–grader, made a bird feeder for the Rhinoceros Hornbill using vinyl tubing and crossing sticks throughout the length of the tube.

“At the exhibit, the hornbill right away knew my project had food in it,” Martinez said. “I was able to see him pull the stick out to hit the jackpot, which was fresh grapes and melon.”

“My project didn’t make it to the gorilla exhibit due to safety, however, the enrichment items were able to be used with stingrays,” Garcia said.

Jonathan Wendorf, a sixth-grade student, built a lemur feeder designed like a pinball machine out of a wooden box and plexiglass.

“I had a little maze for the lemurs to move the box around to get the food,” Wendorf said. “My project did not make it to the lemur exhibit; however, the zoo plans to use it for other animals once they make some modifications to it.”

The animal research symposium was held as a free virtual event for the community.  Overall, it was a great learning opportunity for all that were involved.

“As a former HCISD student myself from Early College High School, Class of 2018,” Renteria said. “I was so glad to have had this opportunity in my graduate student career to collaborate with HCISD in showcasing the wonderful work these students have created. Their interest and genuine passion for the research they conducted was evident in their presentations, and as a future researcher myself, I’m incredibly proud to see the youth of HCISD on track for future success.”