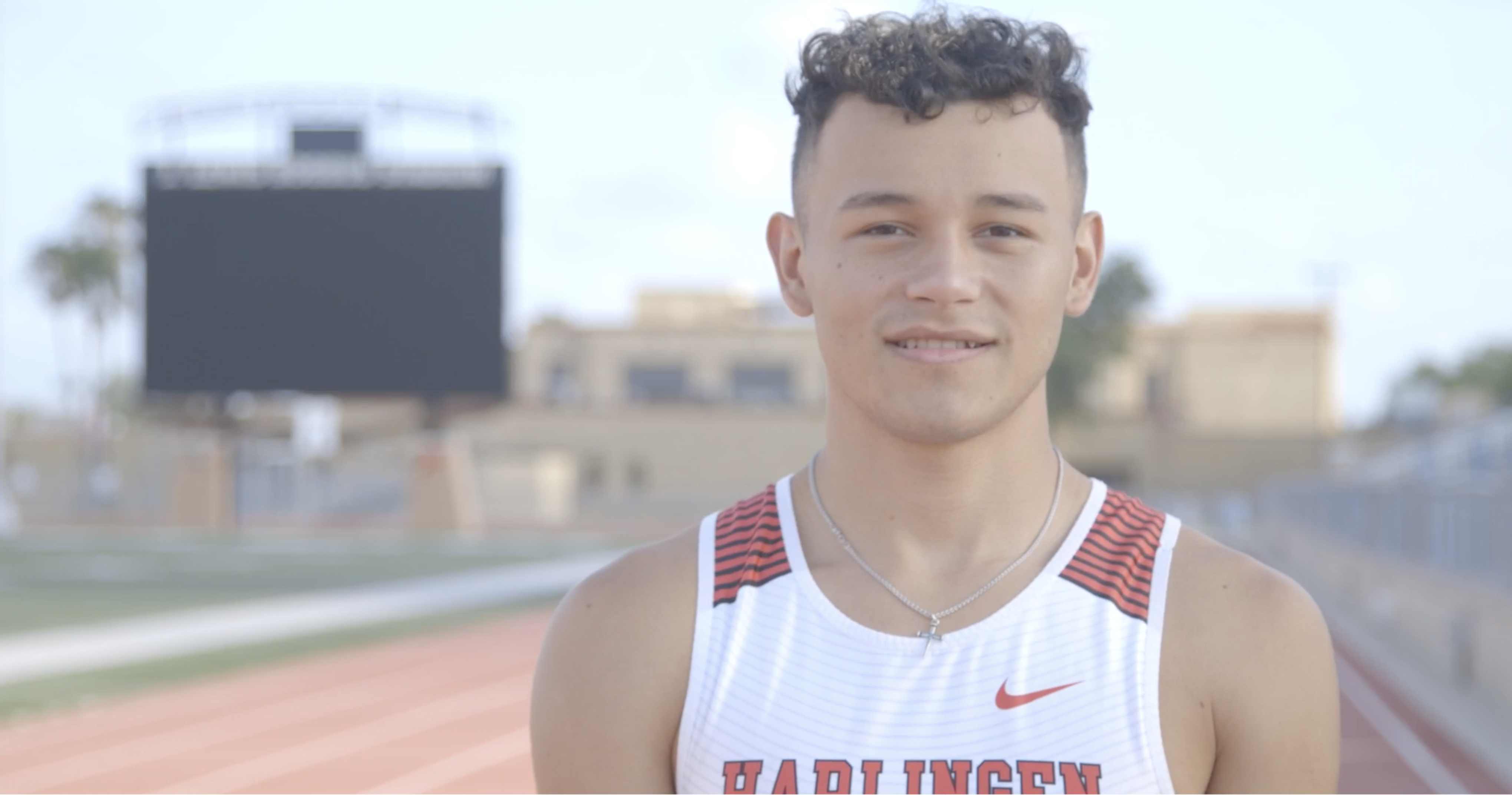 He strides across the track at an incredible speed, pumping his arms back and forth, racing towards the finish line. Ten seconds later, Jose Garcia completes the race and is later named a state track champion.

Garcia, a senior at Harlingen High School won first place in the 100-meter dash at the UIL Class 6A State Track and Field meet in May 2021.

“I just couldn’t think of anything,” Garcia said about his thoughts during his state-winning run. “I was just letting my emotions out and thinking about how I really liked this sport and how I really wanted to win this race.”

Garcia began running track when he was a seventh-grade student at Gutierrez Middle School.

“Me and a buddy of mine, we were just thinking about sports,” Garcia said. “And track wasn’t really our thing, but we were seeing other kids run out there, so I asked him if he wanted to try it out, and from there, things started happening, you know?”

“The first time I met Jose, he was an eighth-grader,” Ambriz said. “I was told by middle school coaches to go look at this kid who was running some fantastic times.”

When Ambriz went to go watch Garcia, he was surprised to see fans lined up along the rails.

“It’s not normal for a middle school meet, but then I saw him run, and I knew exactly why they were lined up. At the time, he was very raw, but you could see that he had the ability, the athletic factor, to be a great track athlete.”

Ambriz recognized Garcia’s athletic talent at that point, but over the next few years, he saw him further develop as an athlete.

The first time Garcia made state, was his sophomore year.

“Sometimes you get an athlete who loses, and they think they’ve reached their plateau,” Ambriz said. “But I noticed the change in him the next year. His dedication to the sport, just his attention to detail, and his drive became a lot greater. That is the first time he made state, so you could see the transformation then and there.”

After a year of canceled and postponed events due to the pandemic and other obstacles including an injury, becoming a state track champion wasn’t an easy task.

“It took a lot of focus and a lot of sacrifices, especially my junior year when I almost gave up on track because of my Achilles injury,” Garcia said. “But at the same time, my coaches, my family, and my friends never gave up on me. They always pushed me forward. From there we just started working, taking care of my Achilles.  I kept my head straight and kept the team going because I really love my team.”

Pure determination and raw athletic ability allowed Garcia to return from the state track meet with three medals.  Along with his first-place win in the 100-meter dash, he also earned second-place medals in long jump and the 200-meter dash.

On June 9, Garcia signed with The University of Texas at San Antonio to pursue his academic and athletic dreams. He hopes to major in kinesiology.