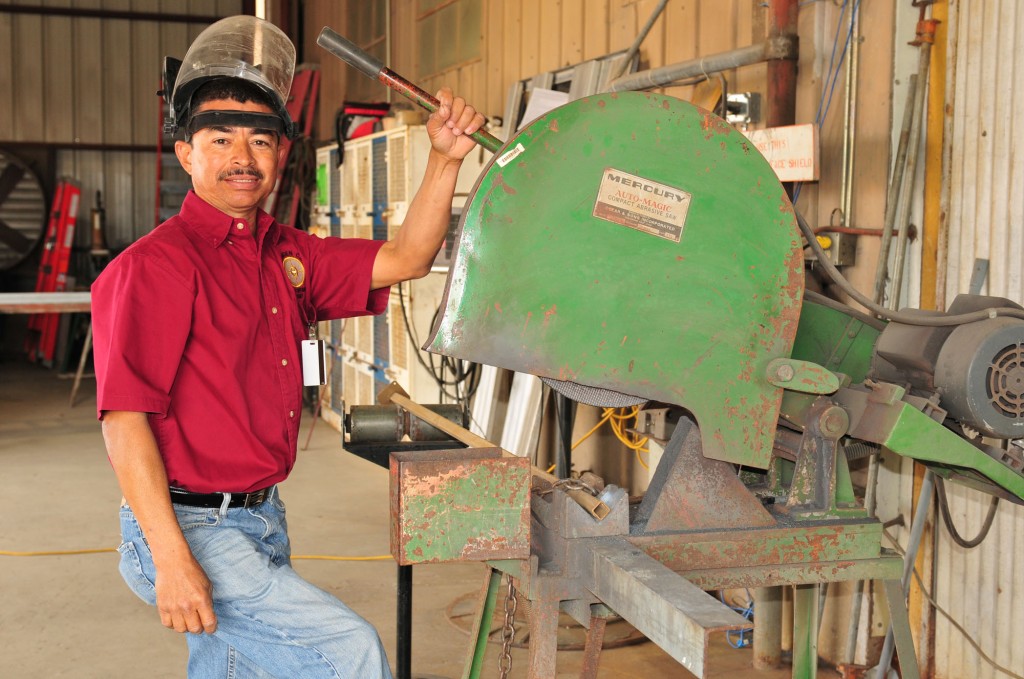 Whether you’re a student sitting at your desk in class or a fan in the stands of Boggus Stadium, you’re probably using something that Guillermo Galvez crafted with a blowtorch and steel.

Galvez is the lead welder at the Harlingen Consolidated Independent School District. On any given day, he is handcrafting materials for classrooms, sports facilities and other departments. He uses his creativity to find the most efficient solutions for any project. This includes repurposing recycled materials to create new fixtures. When asked what he’s made he joked, “Everything you can think of that is made of steel.”

“Everyday is different, and I’m always expecting a new task,” said Galvez. “I come in ready to solve a problem. Sometimes I’ll get messages from students and campuses to thank me for what I put together for them. It’s rewarding to know that they use the work that you do.”

Originally from Honduras, Galvez remembers putting stuff together at a young age. It was his fondness for hands-on activities that lead to him to begin learning the craft of welding after Elementary School.

When the gloves and blowtorch are off, Galvez is active in his other favorite hands on activity, pool. Like welding, he has been active in pool since a young age and won various tournaments in Honduras. His lucky streak hasn’t ended in Harlingen. He still brings home trophies on the occasions he participates in tournaments, but most of the time he is playing for recreation.

“In Honduras, I would beat most of my friends,” said Galvez. “I still do.”

If not busy with his hands, Galvez is busy peddling his bike throughout the city. He rides his bike anywhere he can on the weekends.

Galvez has been with HCISD for 25 years, and looks forward to the challenges each day will bring.