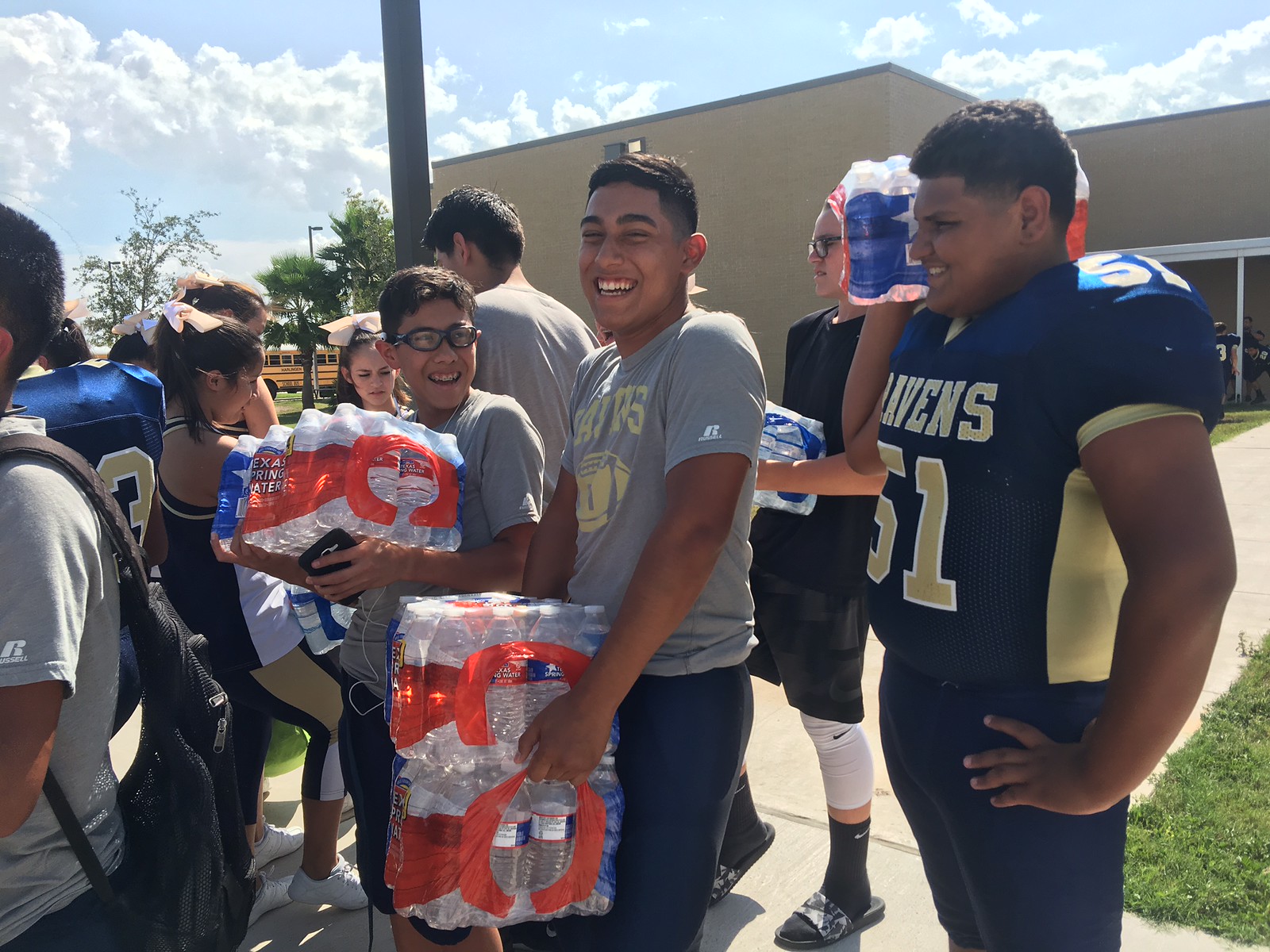 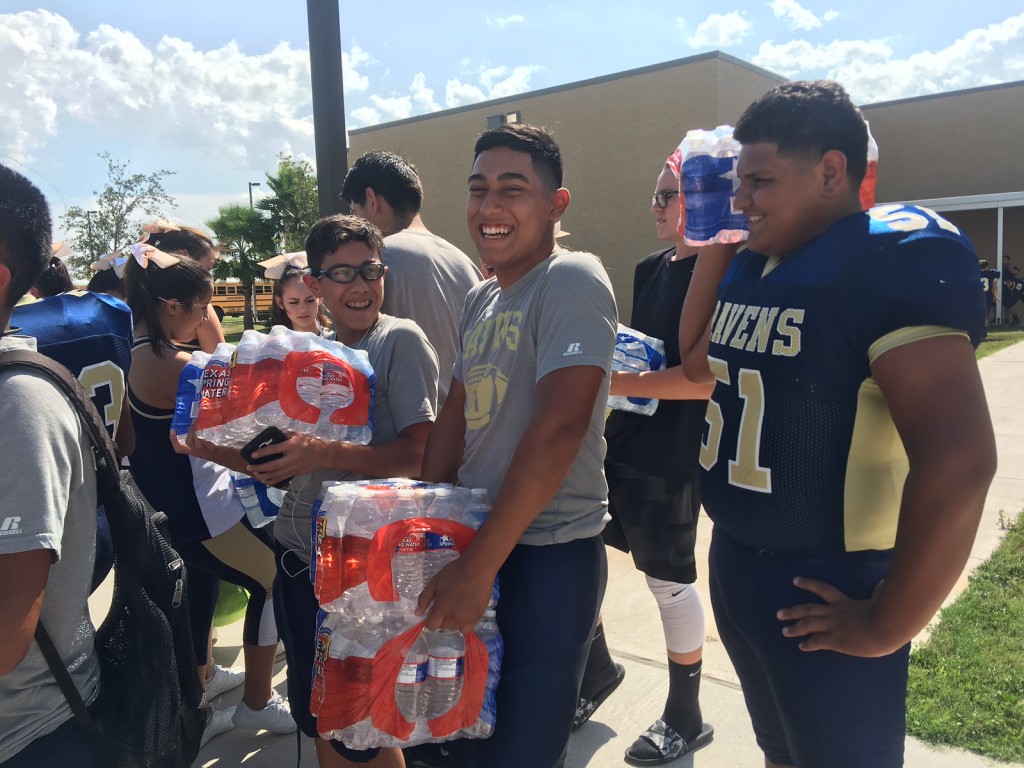 On August 25th, Hurricane Harvey slammed the Texas coast with its unforgiving winds reaching 130 miles per hour, causing widespread destruction and catastrophic floods. As the footage of thousands of distraught people emerged across news and social media platforms, citizens of Harlingen and members of the Harlingen Consolidated Independent School District all had one burning question: How can we help?

“I could not sit idly and just watch it unfold on television,” says Robert Rodriguez, a social studies teacher at Vela Middle School. The looks of desperation on people’s faces as they were being rescued from their flooded homes drove him to participate in relief efforts. He followed the district’s lead to support Habitat for Humanity and coordinated a monetary donation collection amongst the sixth-grade students, where they reached a goal of $500 in one week.

Rodriguez describes the pride on his students’ faces knowing their contributions would go to a great cause.

“Some kids gave up their allowances to assist,” he shares. “Students learned about compassion towards each other. At some point, we all need help, and you hope that someone will be there to help when you need it.”

HCISD and Habitat for Humanity of the Rio Grande Valley joined forces after a public service message from the nonprofit organization’s executive director Wayne Lowry received an overwhelming response on social media.

The organization, which primarily concentrates on long-term rebuilding efforts and homeowner repairs, had developed a hurricane response plan anticipating a direct local impact, and after the storm made landfall, offered to send relief to those in distress.

In collaboration with additional donors throughout the Valley, HCISD and Habitat for Humanity filled and sent 130 pallets of emergency relief supplies in a 53-foot semi trailer, two 26-foot trailers, and a 20-foot box truck to Aransas Pass, in addition to two 53-foot semi trailers and a smaller load to Victoria.

The partnership allowed HCISD to have the logistic means to render aid. Sister affiliates of Habitat for Humanity in those affected areas directly distributed the food, water, hygiene products, and supplies to those in dire need of assistance.

Lowry recounts the scene as they approached a mass of people in desperate need, overwhelmed with appreciation.

“They formed a giant chain and helped unload the truck to distribute the water to everyone,” he says. “Even when the people of Texas are hurt, they bend but don’t break. It was powerful to see the resilience. They weren’t just there to get the water and leave, but they wanted to make sure everyone in need got water.”

The strong call to render aid resonated throughout the district.

“It’s situations like these that show the spirit of our community coming together for our neighbors during a time when they need it the most,” says Superintendent Dr. Art Cavazos. “We are grateful for this partnership with Habitat for Humanity and fortunate to have students, parents, staff, and citizens who care so deeply about their fellow Texans.”

Dan Araiza, a principal at Secondary Alternative Center, took the important role of coordinating all district donation deliveries and transferring them to the Habitat drop-off site.

“Service to humanity is important for our youth,” says Araiza. “The district leadership and administrative teams are always indicating education goes beyond the four walls of the classroom.”

As soon as notification spread of the partnership with Habitat, Araiza felt it was his duty to step up and assist.

He organized staff and students to aid in the collection of donations at multiple elementary, middle, and high school campuses across the district. Students participated in the sorting, packaging, and proper assembly of pallets in the delivery trucks. The organizing of massive amounts of items proved to be a challenging task requiring brainstorming and teamwork, but students quickly learned how to assemble the pieces of the puzzle.

Araiza was proud to see several of his students take the initiative to volunteer during the Labor Day holiday, including a recent Houston area transfer student who was compelled to lend a helping hand as he saw the devastation in his home city.

“We have to reinforce to our students that they have a responsibility to serve their communities,” says Araiza. “They will forever remember sorting through supplies and loading up pallets.”

Wendy Knight, a special education resource teacher and student council advisor at Treasure Hills Elementary, is no stranger to hurricane relief efforts and immediately jumped on board to send flyers and gather donations. Knight participated in significant recovery and rebuilding operations while living in Orlando when Florida was hit by Hurricanes Charley, Frances, and Jeanne in 2004.

She is proud of the district’s rapid response, knowing firsthand how valuable every second is in times of devastation. She was thrilled to learn about the district’s partnership with Habitat for Humanity, which stands by a firm statement of donor transparency, ensuring 100 percent of monetary and tangible donations are directly allocated where they are needed the most during recovery efforts.

“I’ve been in a situation where we were without power for 14 days, and our local church organization delivered ice to all of us affected,” Knight recalls. “I imagine the feelings were the same when the people of Aransas Pass first saw the Habitat trucks rolling in.”

The real time, disastrous phenomenon prompted valuable lessons and discussions amongst students throughout the week, where they pondered about what supplies they felt would be crucial for the thousands of displaced students.

Knight says the displaced students are the driving force behind her call to action during this time of turmoil.

“The little ones don’t understand the drastic, life-changing effects of storms,” she says. “When people get evacuated, sometimes families get separated, and children are absorbed into the foster care system. We have to welcome them with open hearts for as long as necessary.”

The humanitarian mentality spread quickly across HCISD. Knight’s colleague, third-grade teacher Chad Bender, responded to his church’s call to deploy as a feeding-trained volunteer. Bender was amongst a handful of individuals previously trained to set up remote, fully equipped outdoor kitchens, capable of providing up to 10,000 hot meals a day. Bender and his team spent two days setting up in northern Corpus Christi and four days cooking an estimated 25,000 meals for survivors in the neighboring Rockport and Aransas.

Bender emailed his assistant principal to ask for permission for the deployment the Saturday after the storm’s arrival, who in turn forwarded it to Dr. Cavazos. Bender was astonished when he received an email from his superintendent on Sunday morning, authorizing his request to travel to the affected areas for a week.

“His quick response tells you exactly where his heart is,” says Bender. “I am very grateful to work for a district that did not hesitate in allowing me to be part of the relief efforts. I could not have gone without their support, and that of my administration and colleagues.”

Emergency relief efforts have transitioned into the long road to recovery, and numerous volunteers are still working diligently to provide comfort and support to those affected.