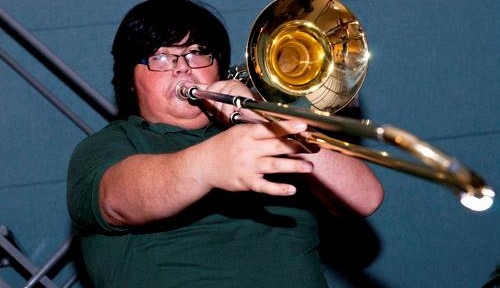 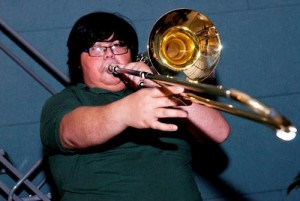 When Harlingen High School South senior Thomas Gonzales stepped out for his solo “Round Midnight” during a jazz competition at Texas A&M Kingsville last year, he couldn’t help but notice that the judges stopped taking notes, he said.

“One of the judges was just staring at me like this,” said Gonzales, who demonstrated by resting his chin on his hand with his elbow on the table, his eyes staring into the air waves. “I thought that was pretty cool to see that reaction. They are always writing stuff down, so to see them just listening struck me.”

After the performance, Dr. Oscar Diaz, an assistant professor for trombone at TAMUK, approached Gonzales to talk to him about his performance, Gonzales said. At that moment, Gonzales knew he wanted to be a professional musician, and he soon decided that TAMUK would be the place for him to further his pursuit of that dream.

There have been a lot of success stories in the Gonzales’s music career.

As a sophomore, he placed in the first chair for tenor trombone at the all regional jazz auditions. His next year, he improved in the all state audition, placing in the fourth chair for the state band. This year he finally achieved the elusive spot of third chair all state, which placed him in the first jazz band with the best student musicians in Texas.

“Because I made the all state band, I’ll be performing at (Texas Music Educators Association annual conference),” Gonzales said. “I’m pretty excited about going because its a pretty cool event. They have music books and professional musicians are there. I know students who have gone in the past just to go, but it means something to me to be going to perform and to go for free.”

Despite the successes of this mop top student with a big smile and big ambition, his first few years in music did not go as smooth as his trombone sound.

“I still don’t have my own instrument,” said Gonzales, who is currently saving up to buy his own trombone, which will cost between $6,000 and $12,000. “A lot of the kids in sixth grade had parents who would rent them an instrument, or they would pay in payments for an instrument. It made it easier for them to have more practice time. So in middle school, I didn’t have the opportunity to take my instrument home to practice.”

“My main goal is to be a professional jazz musician, either in my own group or in a duet or trio,” Gonzales said. “There’s a lot of little trios that can play regular gigs and make money. It’s just fun to play, which is why I’m going into music.”