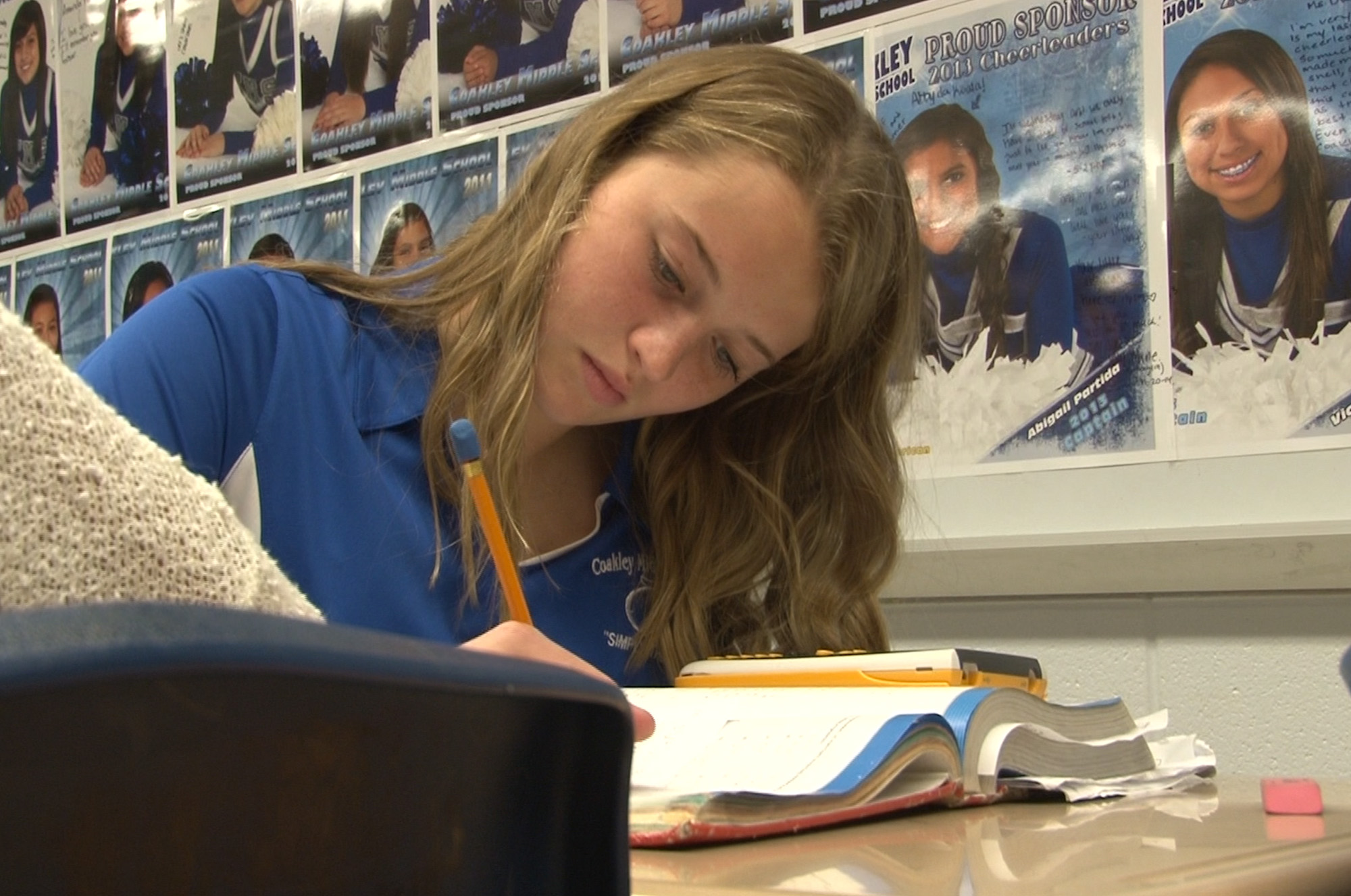 “Simply the Best,” are words that eighth grade student Lauren Resendiz carries close to her heart as they symbolize the pride she feels for her campus, Coakley Middle School.

One of the greatest lessons, she has learned at Coakley is to push herself further than she thinks she can go.

In seventh grade, she was inspired to learn that her teacher had enough confidence in her to motivate her to pursue a more demanding math course. So in an effort to break out of her comfort zone, she decided to take an algebra course in eighth grade.

“My seventh grade teacher motivated me in saying that she believed in me,” said Resendiz. “I didn’t get math as fast as the other students. I struggled in seventh grade, but at the end of year I finally understood everything. Then I knew I would be fine if I took on algebra. I never thought I would be making all A’s or be so eager to learn.”

Resendiz, along with the other students in the algebra program, doesn’t see the class as having to do more work but as an opportunity to get ahead.

“Algebra is the only math end-of-course that students have to pass,” said Diana Hale Instructional Facilitator. “These students are a determined group of kids; even if it’s hard for them, they want to do it. They’re in middle school, and they’re already making their determination for graduation regarding math.”

Eighth grade student, John Duncan sought the class out as a way to challenge himself.

“Algebra isn’t a course you have to be in but a course you choose to be in. Students go into this algebra program because they want to be challenged. Not a lot of students want more work. So when you take the students that want be challenged, and you put them all together, it creates an awesome environment not only for learning but for growing.”

Duncan hopes that in challenging himself, he not only succeeds academically but that he can put the lessons that he’s learned to use in other areas of his life.

When you get to go somewhere that has such positive programs it not only affects your school life but your entire life in general. I think that when I leave Coakley, it’s those experiences that I will carry with me forever, said Duncan.

Selection for the program is made through the Iowa Algebra Aptitude Test. Scores determine if a student is automatically admitted into the program. If a student does not meet that criteria but still wants to be in the class, a learning contract must be signed stating that the criteria was not met, but he or she still wants to attempt the class.

Coakley offers algebra classes as part of its Pre-AP program, and the bar is set high with rigorous lessons.

“The program prepares students for high school because we train our kids here in middle school with a lot of rigor work,” said Belinda Duran Algebra 1 Teacher. “I am their teacher and their guide, but they must also learn to find information on their own. I feel like the students won’t grasp the material well or value the learning as much than if they succeed at it themselves.”

Though the material is challenging for students, with the help of the educational support provided during the advisory period and tutoring sessions, Coakley has maintained a 100 percent passing rate since it began offering algebra to eighth grade students.