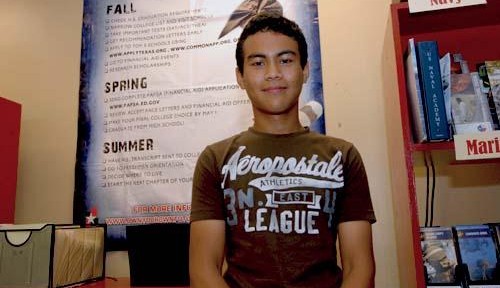 Shaikh, a chemistry enthusiast, trumpet player and top student in HHS class of 2012, received a $15,000 scholarship to Rensselaer Polytechnic Institute in New York after HHS counselor Melissa Kilgore recommended him for the scholarship. The scholarship came with the prestigious Rensselaer Medal, an award that no other Cardinal has ever won, Kilgore said.

“I was just so surprised when Mrs. Kilgore told me about it,” Shaikh said. “I looked into the college and once I saw it’s prestige as a top 25 university I couldn’t believe that a school like that would offer me a scholarship.”

Shaikh’s passion is in chemistry. He wants to study biochemistry like his older brother, who is a sophomore at Southwestern University, he said.

“I like chemistry because I can internalize the information, unlike some of the other sciences like biology where it’s all memorizing,” he said. “With chemistry, I can actually apply the lessons, so it sticks with me.”

Outside of chemistry, Shaikh thrives academically, currently ranking number one in the HHS class of 2012, he said. It’s no accident that he is aligned to be the Cardinals next valedictorian. Finishing in the top of his class has been his ambition since middle school, he said.

“It was actually my brother who sort of intimidated me into being the valedictorian,” he said. “He graduated second in his class, and he always told me how it important it was to finish in the top 10. But he didn’t think I could be good enough to finish number one.”

When he’s not in the chemistry lab, filling out college applications or excelling in his other classes, Shaikh is finding time to practice and perform in the HHS marching, jazz and concert bands, he said.

A trumpet player, Shaikh, has been a musician since sixth grade, he said. He most recently competed in the regional jazz band competitions, where he received a spot on the second band.

“In the past, I have always been very nervous when it comes to auditions,” he said. “I feel like I have conquered a big fear with the regional jazz band auditions. I was able to calm down during in the auditions and focus on the music, rather than my nerves.”

“I’m going to miss this atmosphere here at HHS, especially band because I don’t plan on doing that in college,” he said.

Shaikh will perform with on January 27 and 28 with 22 other musicians from HHS and Harlingen High School South for the Regional Jazz Band Concert.