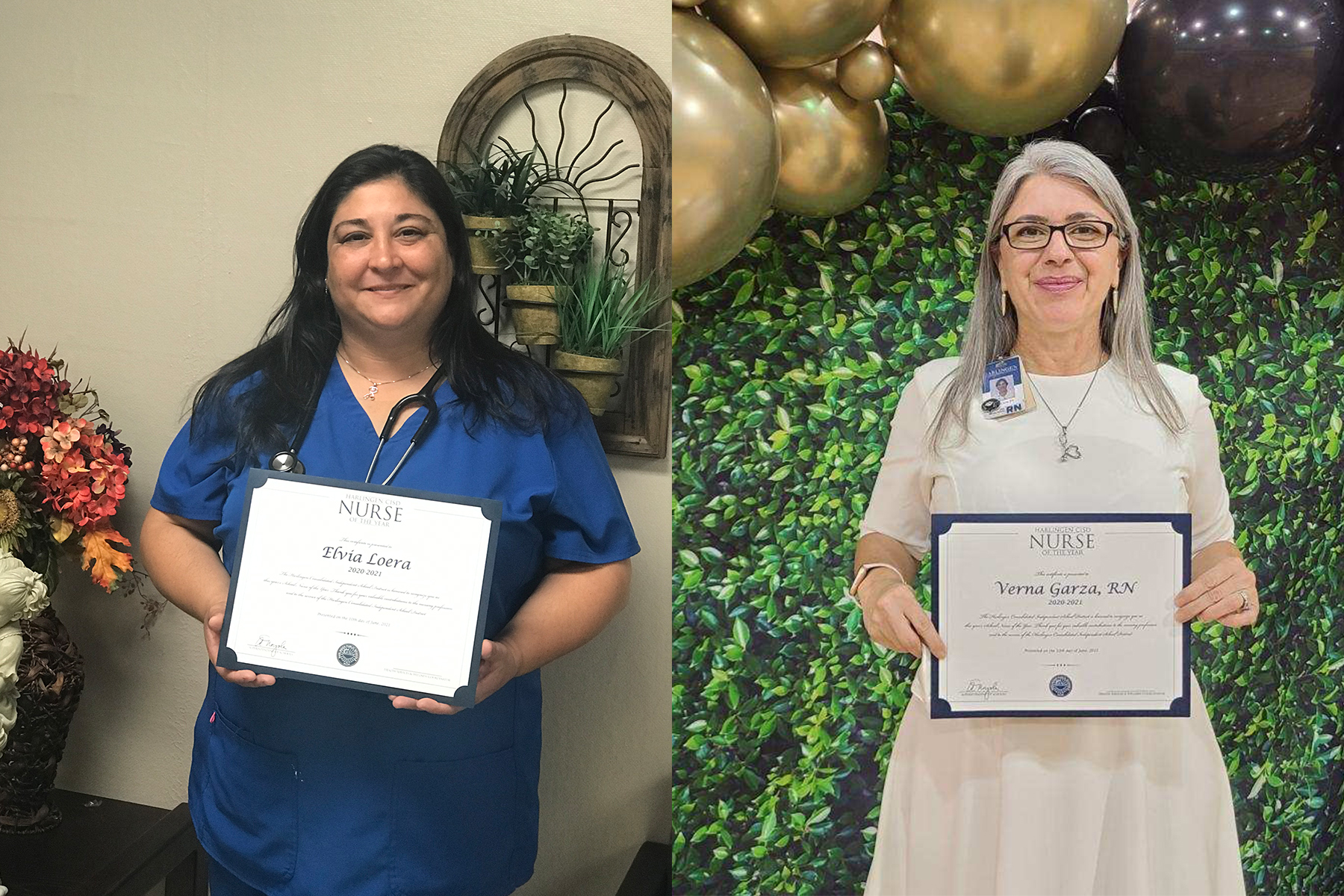 School nurses Verna Garza and Elvia Loera were selected as HCISD Nurses of the Year. They were celebrated for their selfless spirits and all that they accomplished this year, even amid a pandemic.

Garza and Loera were selected to receive this distinction based on votes submitted by their peers. The vote was too close to call, so two nurses were selected for the honor.

Verna Garza is the school nurse at Vela Middle School. This year, she was involved in the Go Red Campaign for the district, which serves to bring awareness of heart disease and provides tools and resources for prevention. She attained record-setting contributions by raising more than $13,000 for the campaign, the third highest in the state of Texas. Garza was also a part of the HCISD vaccination team. She participated in nearly every county, city, and district vaccination clinic, helping to vaccinate thousands of HCISD staff, students, and community members.

One of her peers stated, “Verna always goes above and beyond for her campus, the district, her friends, and her family,” in the Nurse of the Year nomination form.

Garza was surprised and humbled by the recognition.

“While I appreciate the gesture, the distinction makes me very uncomfortable,” Garza said. “I have always described myself as a ‘worker ant’, the ‘above and beyond’ part, is what all nurses do. I have been a nurse for 29 years; it’s a profession that has given me more than I have given it by allowing me to grow and serve alongside the community that I love!”

Elvia Loera is the school nurse at Milam Elementary. This year, without request, she took on role of an Eschools superuser. She developed Eschools training and documents for nurses, running reports to improve immunization compliance and other implementations that improved efficiency and accuracy of nursing documentation. She spearheaded an initiative to promote sound nutrition and exercise for sustainable weight loss, and she was also a member of the HCISD vaccination team. Loera helped to vaccinate thousands of HCISD staff members, students, and community members by taking part in nearly every county, city, and district vaccination clinic.

Loera was humbled and excited to receive this honor.

“I am fortunate to work with the most caring, kind, and compassionate colleagues, who go above and beyond the call to help others, not only at the campus level, but in the community as well,” Loera said. “It has been a privilege to receive this recognition and promise to continue to be an example of what the true meaning of nursing represents: compassion, patience, empathy, and sensitivity.”