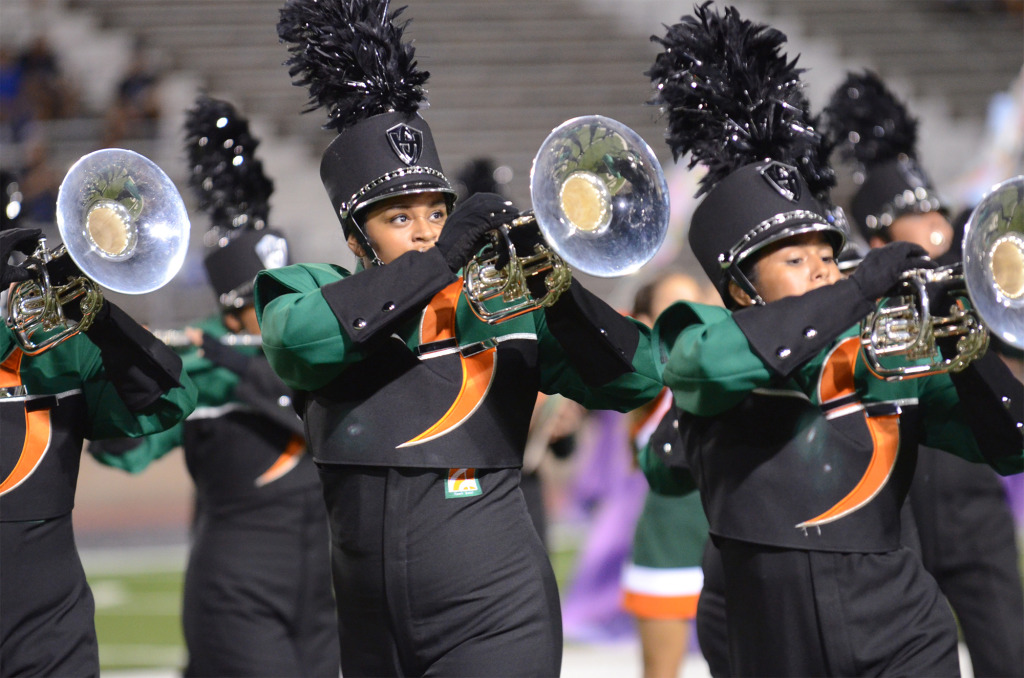 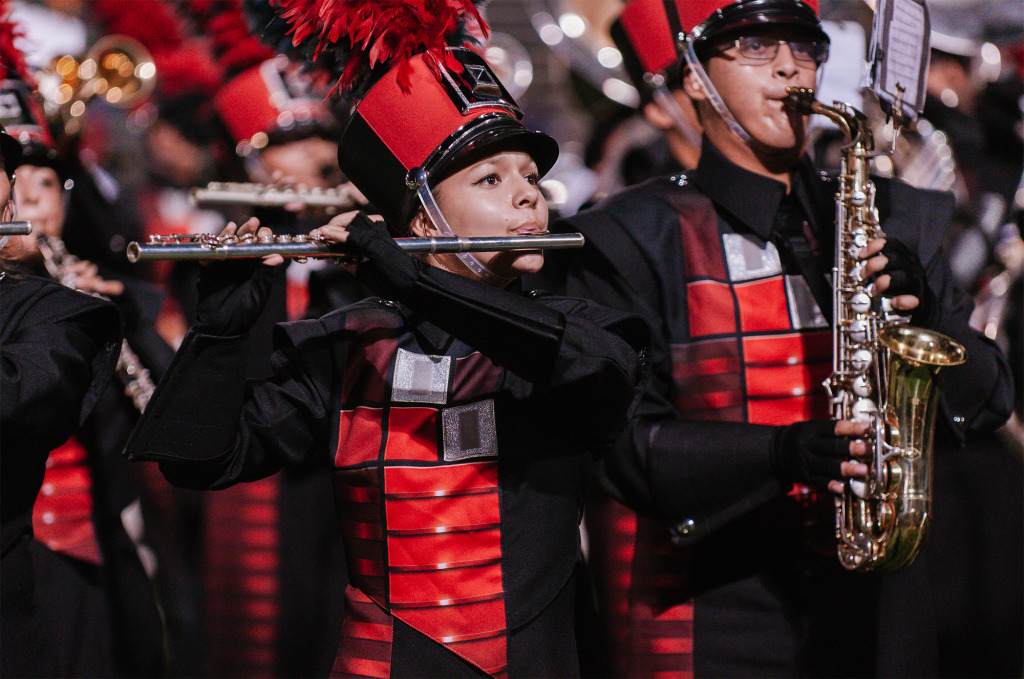 The Big Red Cardinal Band and Might Hawk Band have worked since mid-July in preparation for highly polished performances at this year’s contest series leading up to the UIL Texas State Marching Band Contest.

Harlingen High School Band’s marching show is titled “Unbound” and consists of three very sophisticated pieces of music – Sensemayá, Adagio for Strings, and March from Symphonic Metamorphosis – that were arranged exclusively for the band.

Inspired by the music, the band created visual concepts of ropes, chains, and performers being unbound. Props of ropes arranged in a semi-circle are highly visible throughout the show. The visuals are portrayed in large part by the colorguard and at times you can see brass performers being tied up.

“I’ve got a great staff of band directors that contribute to the direction of the marching band shows,” said Ronnie Rios, HHS Head Band Director. “I’m lucky enough to watch many shows at the high school and professional level during the summers. I also enjoy taking my students to Drum Core International (DCI) every year so they can experience some of the great things I get to see as well.”

With the South band’s motto this year being “Strive for Five”, they are working hard to qualify to the state competition for the fifth year.

“Judges look for the cleanliness of the marching. They want to see all of the forms looking symmetrical, even, and balanced,” said Shane Shinsato, HHSS Head Band director. “They also want quality music sounds; they don’t want anything to sound uncharacteristic. And of course, the overall visual design, they want to see how it works together as a whole package.”

Putting on a marching show takes hard work and dedication on behalf of all the students from the beginning of summer band through the end of the marching season.

“I always remain positive,” said HHS senior Daniel Molina. “Sometimes it’s hard, especially when the sun is beating down on you, you’re all sweaty and your tired, but it’s worth it. I like all the experiences that marching band has given me. I think it’s built up my character and it’s made me a hard worker.”

“The most challenging part of being in marching band is having good time management; it takes place during one of the busiest time of the year,” said Jasmin Ruth Sanchez HHSS drum major. “Since I’m a senior, I have to apply for colleges. I also have to be on top of the band and practice my instrument on the side. This is the endeavor that I have taken on because it’s what I love to do.”

Half-time is something to look forward to for many spectators in the stands at football games. For senior and drum major, Deborah Rodriguez, being a Big Red Cardinal Band member had been a long-time dream that began during Friday night lights.

“Music has been in me since I was born. Marching band is just another thing that I wanted to do,” said Rodriguez. “I remember when my brothers were in football. I came to the football games and I was so interested in half time. I would tell my mom; I’m going to be there one day.”

It is a long road for marching band members, but in the end, the biggest reward is at the awards ceremonies during competitions.

“I cherish the entire journey, but if I were to pinpoint something that I enjoy the most about marching band, it would have to be when we are all standing in block, we’re called to set, and we’re waiting for those results,” said Ivan Treviño Jr. HHSS senior and drum major. “We’re category 6A and they call the results from last to first place, the later we are called, the more the anticipation builds. It will be very exciting for those freshman who haven’t experienced it yet.”

Local contests are held to prepare bands for the Pigskin Jubilee, the Region’s official UIL contest. This year, Pigskin is held on Saturday, October 18 at Bobby Morrow Stadium in San Benito.

“We put a lot of the self-discipline in the students,” said Shinsato. “We tell them that if they provide the sail, we will provide the wind. They’ll go as far as they want to, depending on how hard they want to work. I want that to transfer from the marching field onto their life after high school as well.”

Bands that perform well will advance to the UIL Area Marching Band Contest held in San Antonio on October 25th. Bands that score highest at the Area contest advance to the UIL Texas State Marching Band Contest and will perform at the Alamodome in San Antonio on Tuesday, November 4th in the prelims, along with approximately 38 other 6A high school bands from across the state.

“We want our students to be extremely confident as they step onto the field to compete. I think that there is no substitute for confidence,” said Rios. “We try to instill that in our performers every day. They need to take with them confidence, discipline, pride, focus, and emotion.”

The competition is rigorous and only a few bands make it into the finals. State marching contests for 6A high schools are held every other year in November of even-numbered years.

In 2012, both HCISD bands placed highest in the Area contest and both advanced to State.