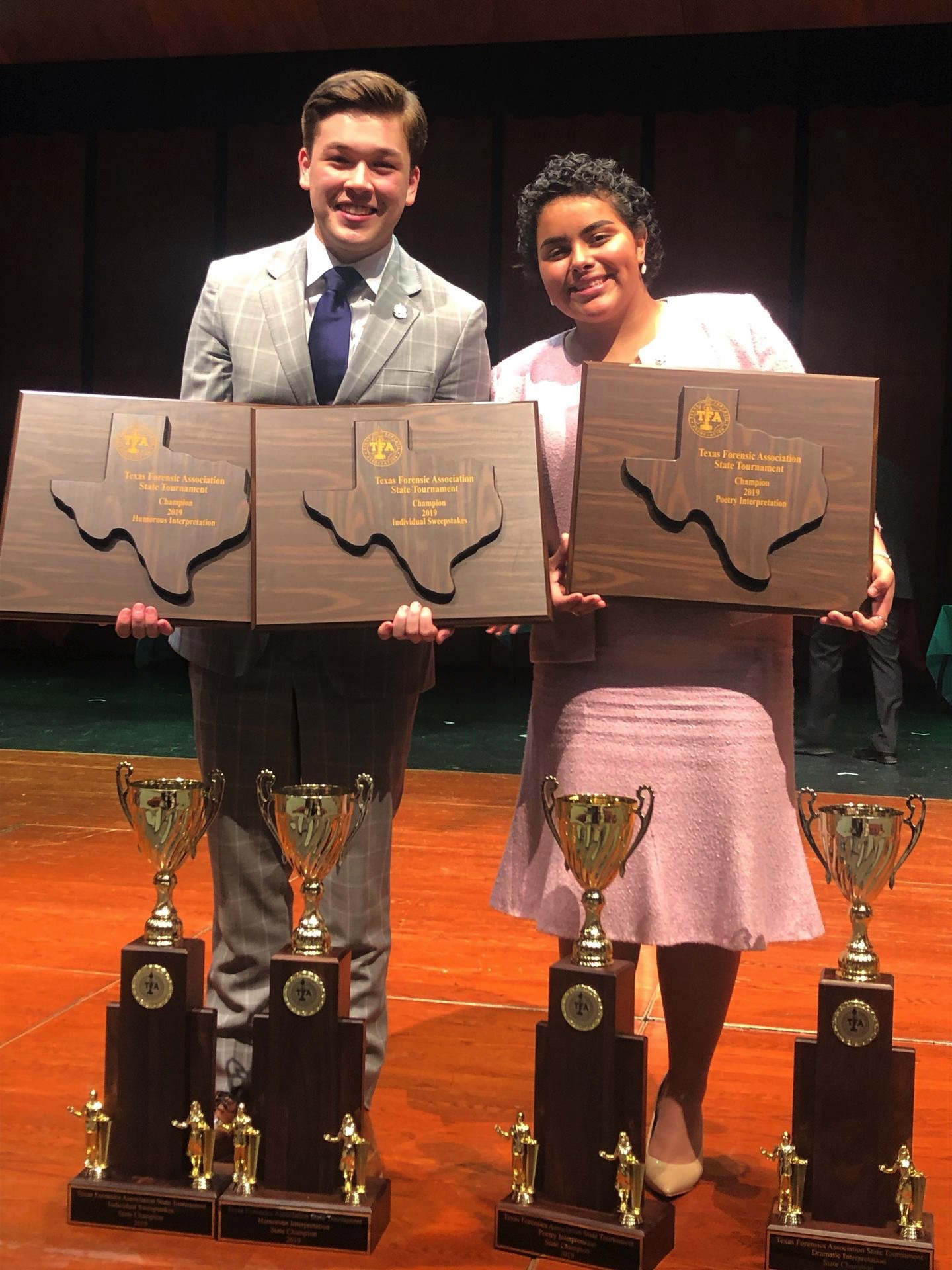 Faith George Ann Zepeda, a junior at Harlingen High School, and John Duncan, a senior at Harlingen High School South, are state champions. In addition to the state champion trophy, John also took home the Top Speaker award at the TFA state competition, a highly competitive event where students from across Texas compete in drama, debate and speech events.

“We knew he was destined to be a champion and be on top because of his incredible sense of work ethic, and the ability to transform and continue to grow,” said Mrs. Crista Maegan Conley, John’s theater arts teacher. “He always found room to improve and get better.”

John won the state championship in humorous interpretation. In front of a panel of judges, he recited part of the TV show “Fresh Off the Boat.”

“For me I’m half Chinese, my mother is an immigrant from Taiwan,” John explained. “I took Fresh Off the Boat, the TV Show about an Asian family in America. I took the pilot episode, cut it down to 10 minutes and kept about five or six of the characters and performed that.”

In between his performance at the state competition, he gave a quick introduction about the piece he chose to interpret and what it means to him.

”That’s where I told them where my mother is from and what the story means to me because I’m half Chinese,” he said. “It was so cool to be able to feel so confidently in my culture and my background in front of so many people.”

This wasn’t John’s first trip to the state competition, rather his fourth, having made it every year during high school.

In fact, John was among a group of middle school students who competed alongside high schoolers. He’s been succeeding ever since.

“When I got to Coakley Middle School, I was fortunate enough that they were a program that had been winning district,” he said. “I was like, ‘Wow this could not be more perfect for me.’ I had just fallen in love with this activity and to be able to continue this in middle school was just a really huge blessing and surprise.”

John has already been accepted into DePaul University in Chicago and plans to enter into the theater arts field.

“Whichever school he chooses, they’re going to be so lucky,” Mrs. Conley said.

Faith earned the state championship in poetry by best reciting part of the Andrew Poems by Shelly Wagner.

“As soon as I finished performing, I almost broke down in tears,” Faith said. “I was confident. It was a great piece, and a part of me could relate to it.”

Having moved to Harlingen this year, Faith was welcomed by her fellow students as well as those within the speech, drama and debate program.

“I’ve grown so close to my team, and honestly they’re like my family. They’re amazing, and we all work together as a unit and as one. It’s beautiful,” Faith said. “It’s been an amazing journey over here.”

“I don’t know where I’d be without him,” Faith said. “He’s a big reason why I’ve come this far, and why I’ve done so good is because of him and because of the work, and how much he believes in all of us.”

Competing in speech, drama and debate has taken Faith to Harvard University and the University of Texas at Austin.

She plans to spend part of the summer honing her speech, drama and debate skills.