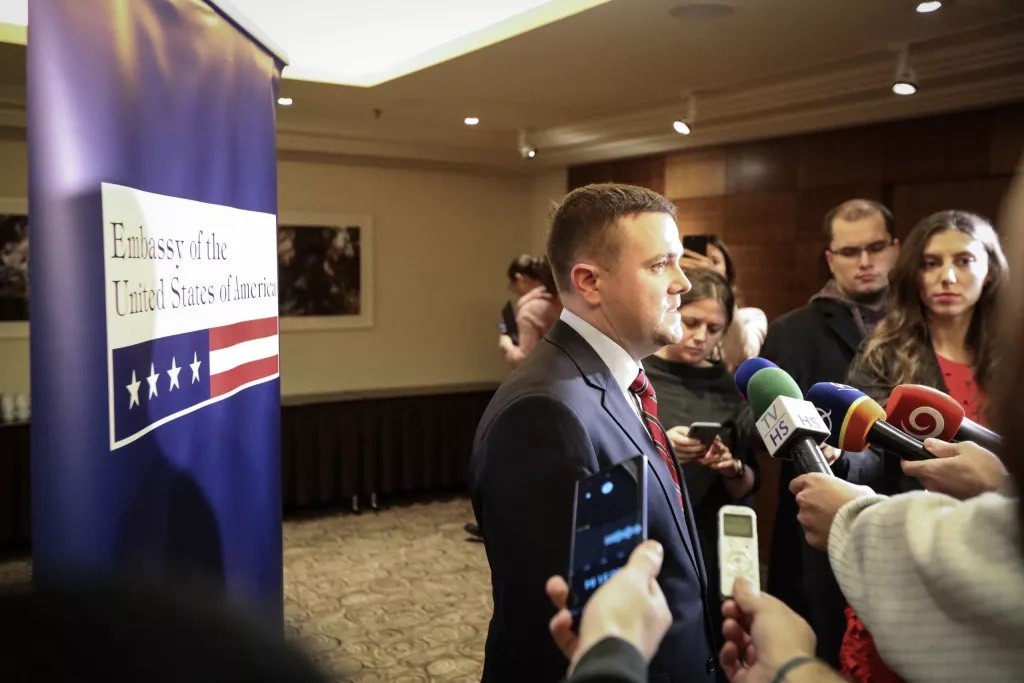 Growing up in Harlingen, Griffin Rozell never imagined that one day he would work overseas.

A 2000 graduate from Harlingen High School, he now serves as the Spokesperson for the U.S. Embassy in Prague, Czech Republic.

“I didn’t know what a Foreign Service Officer was when I graduated high school,” Rozell said. “And now I can’t imagine choosing a different career.”

As part of his job, Rozell advises the Ambassador and other Embassy officers on media relations and overall communication strategy.

“We inform the Czech public about the U.S. government’s policies and goals in the Czech Republic, strengthen our partnership with the Czech people, and present a positive image of the United States and Americans,” he said.

Rozell joined the Foreign Service in 2010.

“I was working as the Assistant Director of a Security Research Institute at Texas A&M,” Rozell said. “I had known for some years that I wanted to pursue a career in diplomacy, so it was just a matter of preparing for the competitive entry exam and the actual job responsibilities.”

Career diplomats are known to move frequently to fill different jobs. In the last few years, Rozell has taken on four other roles in various countries before serving in his current position.

During his high school years, he was involved in a variety of extracurriculars including swimming, football, and One-Act Play. In his junior year of high school, he even served as the Cardinal mascot during the football season.

“My family stressed academics, and so I did work to graduate in the top ten percent and top ten overall for my graduating class,” he said.

Even though he was a highly involved student in both academics and extracurricular activities, he believes his participation in UIL Current Events changed his life.

“Looking back though, my senior year I was convinced to compete in UIL Current Events by my speech and communications teacher, and that may have had the biggest impact on my future career.”

His high school experiences along with a fascination for history, cultures, geography, and international affairs prompted an interest in international careers.

Throughout his post-secondary education, he continued to explore and expand his interests. Rozell completed a Bachelor’s in History at Abilene Christian University and later earned a Master’s in International Affairs-National Security at Texas A&M University.

“I was lucky to study for a semester overseas in Russia as an undergraduate which sparked an interest in languages,” Rozell said. “I also knew that I wanted a career where I felt like I was giving back to my community and my country. A career in diplomacy offered that.”

Throughout his time in the Foreign Service, he has received many meritorious and superior honor awards, however, he finds that leading successful programs and initiatives in his field of work is far more rewarding.

“In Slovakia, I led a three-week long ‘road show’ to small and rural communities to celebrate 100 years of U.S.-Slovak relations— reminding a sometimes-skeptical Slovak public why we are allies and how we are stronger together,” Rozell said.

He recalled a few other memorable experiences throughout his career.

“I also worked together with colleagues inside the Embassy and locally to implement and announce U.S. Treasury sanctions against an individual who was a notorious violator of human rights and corrupt practices. This garnered significant goodwill by showing that the United States cares about issues important to ordinary Slovaks and significantly hindered the individual’s ability to continue those practices,” Rozell said. “As a Vice Consul in Poland, I helped injured and ill Americans get the help they needed at local hospitals and helped reunite families as an immigrant visa officer.”

Rozell hopes more students from Harlingen and The Rio Grande Valley will consider a career in diplomacy.

“Texans are slightly underrepresented in the Foreign Service if you look at the statistics, and I don’t meet a lot of colleagues from the Valley in particular,” he said.

He encourages those who are interested in pursuing national security careers to focus on academics while developing other competencies and social skills.

“Students who are interested in a career in diplomacy, or really any national security career, should make sure they explore lots of academic fields—history, political science, languages, literature, and STEM—because national security is a diverse field and there are many paths to take. The ability to write clearly and coherently present ideas will serve you well in many industries.  Foreign language competency is also a tremendous asset, especially if you choose to study languages that are difficult to learn and not widely spoken in the United States.”

Rozell enjoys the diverse experiences that this career path provides, and he is proud to serve in the Foreign Service.

“It’s a tremendous honor to represent the United States overseas and to advance the security and interests of American citizens,” he said.