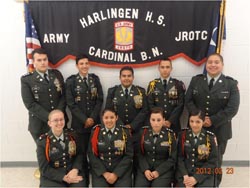 The schedule on inspection day was rigorous, beginning with the arrival of Mr. Frank Bernal and Kenneth Teninty from the United States Army JROTC Cadet Command. The Inspection Team evaluatedall phases of Cadet performance including the formal presentation of a”Command and Staff Briefing”, the demonstration of basic JROTC knowledge and skill, an “in-ranks” personal appearance inspection and the performance of the Color Guard and full military review.
One of the most difficult parts of the inspection is the extremely long and stressful “in-ranks” personal appearance inspection. During this phase, the military inspectors evaluate every Cadet’s appearance and quiz each on basic JROTC protocol. The inspector commented that all the Cadets participated and were very knowledgeable.
The hard work and studying paid off for the Corps when the final score of a 590 out of 600 points was announced. This score is the highest score since the JROTC program was started in 1993 and earned not only bragging rights but also the coveted “Honor Unit with Distinction and Gold Star Rating”.
“This year’s Corps under the direction of Cadet Lieutenant Colonel Xavier Roque and his Cadet staff has once again raised the bar and set an example by which all who follow will be measured,” said United States Army Retired First Sergeant Moses Mendoza, Senior Army Instructor.
“I could not be more proud of the way all 145 Cadets came together and took ownership of putting on a good showing for the inspectors.”