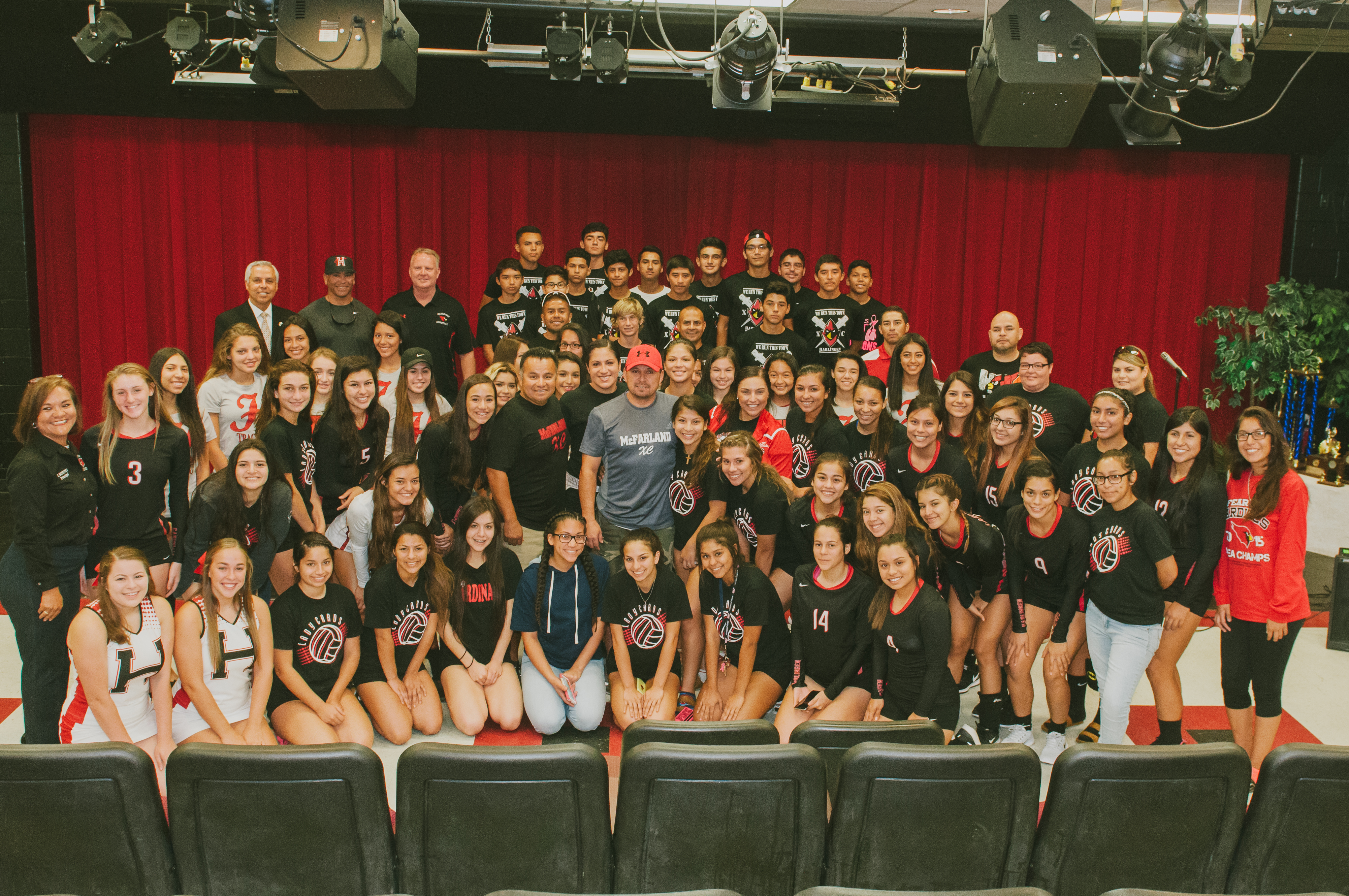 Thomas Valles and Johnny Samaniego, whose lives are portrayed in the 2015 Disney movie, McFarland USA, recently paid a visit to athletic and migrant students at the Harlingen Consolidated Independent School District.

Valles, who is now a Correctional Officer for the state of California and a cross-country coach, recounted their experience and separated fact from fiction in the Hollywood version of their story. He told audiences that he and many others in his 1987 championship team came from broken and low-income homes, so struggles in school

and sports were a fact of life. These are topics that he still talks about with his students in hopes of inspiring them to give it their all.

The true-to-life movie tells the inspirational story of a group of low-income, Hispanic, farm-town boys and  Jim White who go on to win the 1987 state cross-country championship.

“You know even if they used our names, and our stories in the movie, they borrowed stories from some of the other championship teams. Their stories were very similar to ours,” Valles said. “This is our second time here in the Rio Grande Valley, and I see the faces out there. Your similarities and your stories. Whether it be in Texas or California, we come from the same background. Everybody in life has struggles, and there are always people there to motivate you and help you out.”

“Growing up in South Texas, the streets looked the same as they did in the movie and the store owner reminded me of my uncle,” De la Rosa said. “ Some kids in the Valley don’t know the direction they are going. So seeing somebody who has grown up the same gives them an idea of what to expect in the future. It lets them know that success is not going to be easy. That they are going to have to fight a little bit to get to what they want.”

Johnny Samaniego, who is now a coach at McFarland High School spoke about his background and how their coach in the movie and real life, Jim White, inspired his team to accomplish great things in sports, school, and in life. To this day he remembers the advice their coach would give them.

“I remember growing up, not having summers because we had to go work,” Samaniego said.“ But it instilled in us a strong work ethic to be in the fields 10 hours a day and then go run 10 to 12 miles after work. Mr. White would say it is all in the attitude. You can’t control what life gives you, the situations you are in, or the issues you are having. The only thing you can control is your attitude. So every morning wake up and check your attitude. Now as a coach and as a parent, it is what I tell my kids.”

Juan Castellanos, a senior at Harlingen High School South, was in the audience at one of their speeches. He connected with the struggles that Valles and Samaniego described, and as a runner himself, took their words to heart.

“It is very motivating to hear about them and their championship team. Especially, since this is my senior year,” Castellanos said. “There hasn’t been a boy from South who has made it to State for cross-country, so it motivates me to go out there this season and compete well.”

“When I tell people that I live in McFarland, they tell me to move out to a bigger city with nicer homes and neighborhoods. But my house is fine, and my community is fine,” Valles said. “My take on that is if I take care of my street, and if you take care of your street, then everybody takes care of their own little neighborhood. So you have a better town, and if everybody takes care of their town, we have a better state.”