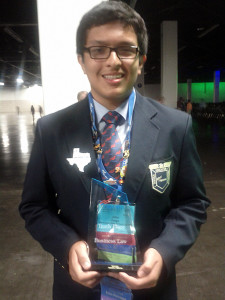 Taking care of business, John-Anthony Fraga, junior at Harlingen High School South, has showed his passion for the Future Business Leaders of America (FBLA) while earning some of their most prestigious awards.

This year, Fraga received national recognition during the FBLA-PBL Awards of Excellence program on June 30 in Anaheim, California, bringing home a 10th place award out of 150 students nationwide.

More than 8,500 participants from around the world attended .

Over the course of his high school years, Fraga has shown his dedication to FBLA.

His next goal is to compete in another area of FBLA so that he can visit Nashville, Tennessee in June of 2014 where the National FBLA Conference will be hosted.